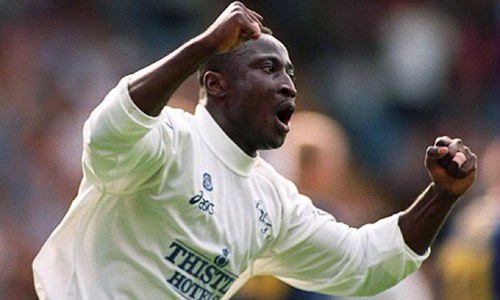 Ghanaian legend, Tony Yeboah is backing Leeds United to make a return to the English Premier League at the end of the 2019/2020 season.

Nicknamed the Peacocks, the side was relegated at the end of the 2003–04 Premier League season. Since then, they have fought in the Championship to try and make a return but all in futility.

This year, they have built on where they reached last year and find themselves top of the table in the Championship.

In an interview, ex-Leeds United striker Tony Yeboah has stressed that the club deserves to be back in the big time and has hence backed the Whites to gain promotion at the end of the season.

"The fans and the club deserve to be back in the Premier League”, the 53-year-old said.

"They have the qualities, a fantastic stadium and fantastic management.

"We are all keeping our fingers crossed that Leeds can come back to the Premier League."

During his two-and-a-half-year stay with Leeds United, Tony Yeboah bagged 29 goals after emerging as the club’s top scorer in 2 seasons.