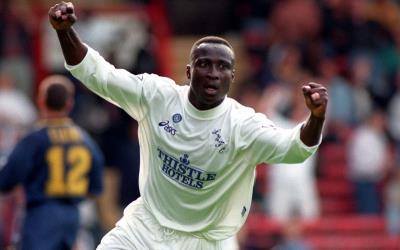 Ghanaian great, Tony Yeboah has reminisced his time with English club Leeds United and has applauded fans of the club for their support during that period.

The former Black Stars forward spent two-and-a-half years at the club and featured for the side between 94 and 97 seasons.

His outstanding performances on top of his hard work saw him become the team’s top-scorer for 2 seasons where he netted 29 goals at the end of his stint.

In an interview, Tony Yeboah has thrown back to his days at Leeds United. According to him, the fans were very supportive and that helped him to be a better player.

“I was not here too long - only two-and-a-half years - but I had a great time with the players and the fans.

"The fans especially, they were fantastic. I will never forget my first game against Queens Park Rangers.

"My first touch wasn’t good, but the atmosphere and support was unbelievable. That gave me strength and morale to think and believe this is a place where I can perform”, Tony Yeboah said.

Now 53 years old, Tony Yeboah added, "I have to tell the Leeds fans they are fantastic, they are super fans. Maybe without them I would not be where I am today."