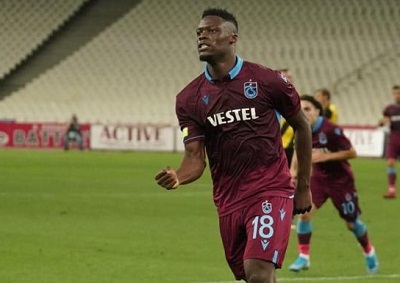 Ekuban, 26, current deal with the Turkish club run June 2022 and his club will want not more than 8 million euros transfer to release him.

Footballghana.com can confirm that Trabzonspor has rejected a five million euros offer for their star striker from one of the interested clubs and are only ready to release him at a price of seven million euros.

Ekuban has been impressive this season for his club and has been linked to Celta Vigo, Al Hilal and Scottish giants Celtic in the ongoing transfer window.

Celta Vigo, Celtic among other European clubs are in race to sign the forward.

Ekuban despite an injury-plagued season scored ten goals in 29 appearances for the club in the just-ended campaign.