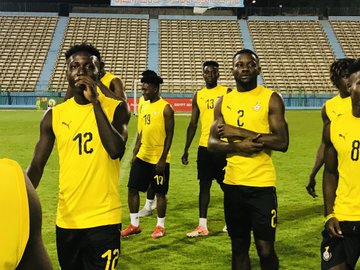 The Black Meteors of Ghana is calling for support from the entire citizenry as they begin their journey in the 2019 CAF U-23 Africa Cup of Nations (AFCON) tournament later this evening.

The West African country is part of 8 teams that are set to battle for glory in this year’s continental showdown. They are in Group A together with host nation Egypt, Sudan, and Cameroon.

As coach Ibrahim Tanko’s men gear up to face Cameroon, they say they are relying on the support of Ghanaians to inspire them to victory.

Though supporter’s presence is not going to be felt at the stadium, they are hoping everyone in Ghana will remember them in prayer and wish for the best when they sit behind television sets to watch the game.

In a short video posted on the GFA’s official Twitter handle, midfielder Michael Agbekpornu and Evans Osei Owusu have appealed for every Ghanaian to back the team.

While cup glory is up for grabs, the Black Meteors want to finish as one of the top three clubs to secure qualification to the 2020 Tokyo Olympics games.

Midfielder Michael Agbekpornu calls for support for Black Meteors as they begin the African U23 Cup of Nations on Friday.