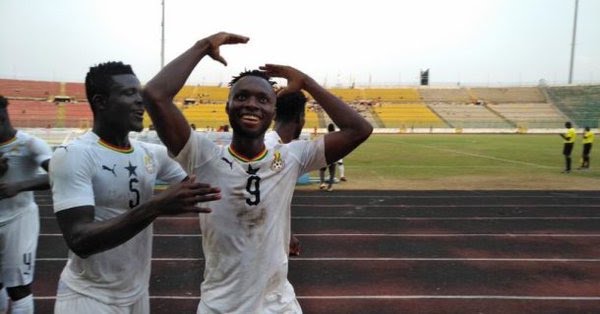 Black Meteors of Ghana walloped Gabon 4-0 at the Accra Sports Stadium on Saturday in their U-23 Africa Cup of Nations penultimate qualifying round.

Ghana were quick out of their blocks and on three minutes winger Osman Bukari cut in from the right to fire a shot but it was coolly collected by goalkeeper Apaya Ngduegne.

A minute later, Gabon missed a glorious opportunity to take the lead following series of slips by the two centre backs but for the sterility of striker Ovono Essogo.

After a quarter of an hour played, the Black Meteors took the lead through Kwabena Owusu’s strike after he received a pass from Joseph Paintsil inside the box and curled into the roof.

Musah Nuhu missed a sitter after the centre back had made a run into the box and received a squared pass from the right from Benjamin Tetteh.

Just after the  hour mark, Gabon came close to snatching the equalizer before the half-time whistle when Mboulou Nzigou fired a shot across the face of goal- but it looked goalie Baah had it covered.

Three minutes later Nzigou tried again from distance but was off target.

Gabon hit the upright after a lovely move from the right.

Two minutes into the second half, substitute Bernard Tekpetey who replaced Benjamin Tetteh before the start of the stanza, drilled home the second goal.

In the 54th minute,  Ovono Essogo tried an overhead kick from inside the box but it was wide.

Tekpetey denied himself a brace after skying his effort from six yards.

Winger Bukari added the third in the 75th minute when he stole a ball from the Gabon with his head and went on a one-on-one with the goalkeeper and he kept his head on his shoulders before slotting home.

Five minutes to time, the Trencin player grabbed a brace to seal the demolition exercise after collecting a pass from the midfield and powerfully placing in into the roof.

But the former Accra Lions FC player did not play the entire duration and was replaced by Richard Danso.

In added time, Owusu should have done better with the last chance of the game when he raced from the right but instead of placing a pass, he chose to fire at goal and he missed

The return leg which will be played in Libreville in three days time should be a mere formality.