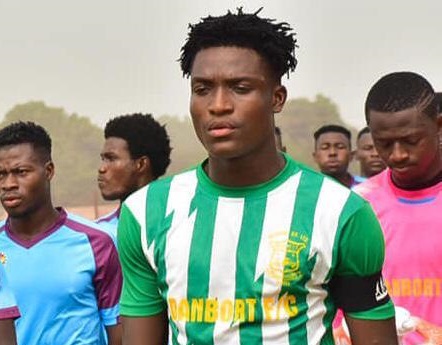 After moving from the U-17 to the U-20 making his debut at the 2019 Africa U20 Cup of Nations, the Danbort FC and Ghana U-20 center back have grown into an important player for club and country.

Base Soccer will take over Adjei 's marketing aspects to ensure that his brand capitalizes on his successes on the field and off the field.

The decision to sign with Base Soccer reflects the intention of the player to play in some of the top-flight leagues.

According to news, top European clubs like Napoli, PSG, and Genk are chasing Adjei, they want to bolster their various defenses.

In the Scoutsourced Top 60 value players reported in the 2018/19 season, Nathaniel Adjei was rated the 5th best young player.

The potential capacity of Adjei has been described as a self-controlled center back, fully commanding both on the ground and in air.

According to Scoutsourced, Adjei stays on his feet and seems determined to distribute with simplicity, but also able to look long with touch. Be very surprised if he does not get a move soon, as he could already do a job for a Ligue 2 side at 16.

This signing is the first in the project involving AM-I sporting agency's Mr. Ibrahim Sannie of Ghana and Base Soccer Agency's Mr. Marcos Serioux.