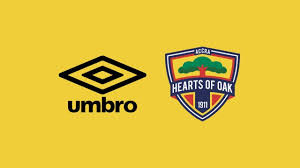 Accra Hearts of oak's kit deal with Umbro remains intact despite Noonan's exit, the PRO of the club has reiterated.

The Ghanaian giants reached an agreement with English sportswear and football equipment supplier for them to become the official kit sponsors of the club.

But the details of the contract has remained unknown to the public as no products from Umbro has arrived, 5 months after the deal was announced.

There is now been a renewed fear the that move will collapse following the exit of former MD Mark Noonan, who brokered the deal in October last year.

But speaking on Happy FM on Friday Opare Addo said Noonan's exit has no nexus with the deal which could see the rainbow club being kitted by a world-class kit firm.

"The Umbro deal will happen," he said.

"Mark Noonan resignations has nothing to do with the Umbro deal.

"Mark Noonan and Togbe Afede do not have any problem contrary to the release out there.

"We have not regretted bringing Mark Noonan because he has done well for the Club."

The Phobians on Thursday announced that Noonan will not return to his post, leading to the appointment of Fredrick Moore as his replacement at a board meeting.

Noonan officially began his duty in March 2018 with the task of reviving a club's fortune and image in his three(3) years contract the former African Champions.

He left the country last month to attend to some family issues, according to clubs earlier statement in February .

Besides the Umbro deal, Noonan also facilitated the movement of the team's training from the Legon Ajax Park to the Pobiman field, which has been earmarked for sports complex.