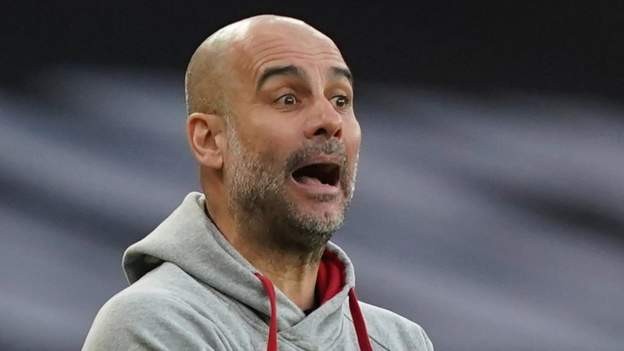 Grealish missed the game against Leicester City with a leg injury

Aston Villa have reportedly banned their squadexternal-link from playing the game amid concerns Jack Grealish's absence against Leicester City was leaked by a fantasy football social media account.

Villa manager Dean Smith said he would look into how the news emerged.

"I know players play these games but I don't know what it is," said Guardiola.

"Sometimes there's a selection and players are friends with other teams and they talk.

"Sometimes it happens, it's incredibly unethical and unprofessional but you cannot control it."

England midfielder Grealish was ruled out of Villa's 2-1 defeat by Leicester on Sunday with a leg injury, ending a run of 48 consecutive Premier League starts.

Smith said the injury being made public "certainly" helped the Foxes.

"I was made aware on social media there were rumours he was not going to play," said Smith.

"It is something I would not be happy with."