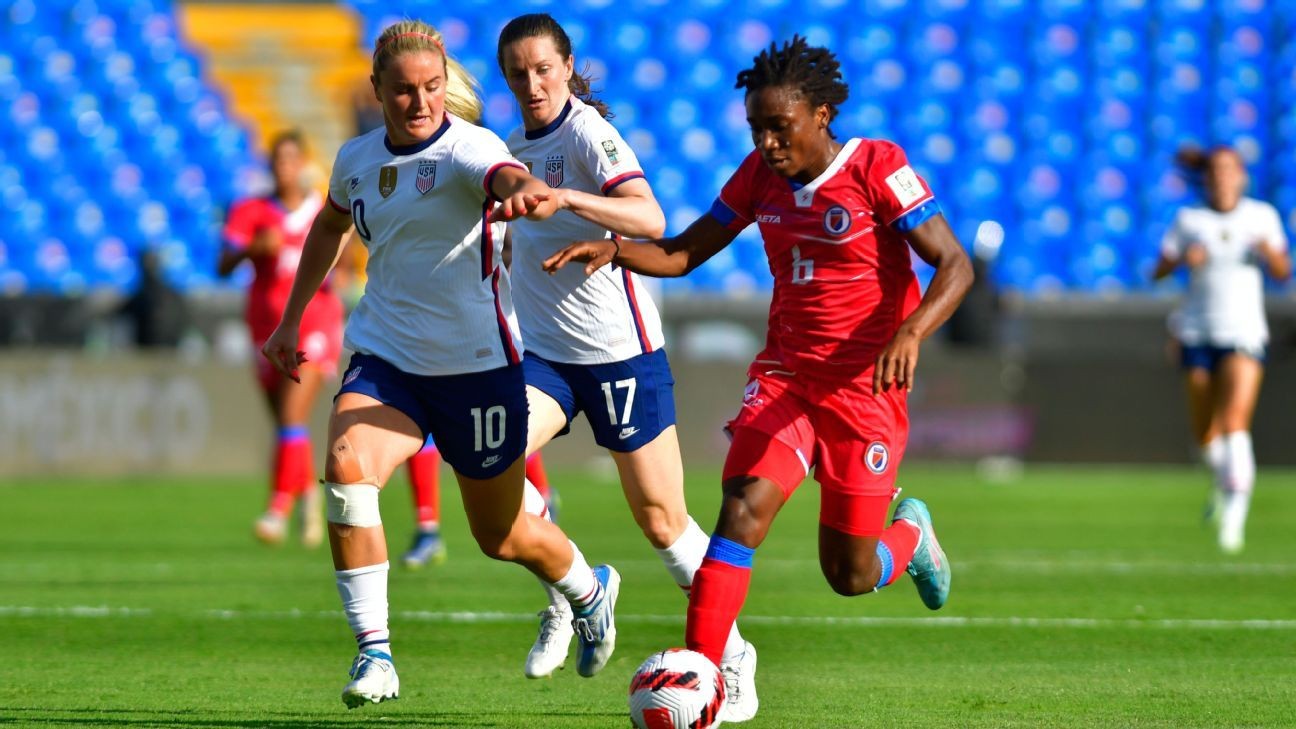 On the surface, there was plenty of familiarity about the United States women's national soccer team's 3-0 win over Haiti to open the CONCACAF W Championship on Monday in Monterrey, Mexico. Alex Morgan scored a first-half brace, and the Americans worked through some early rust to prevail in their opener at a regional tournament, one that doubles as World Cup and Olympic qualifying for the first time.

It was a professional performance from the U.S., and it accomplished the main objective in the first step toward qualification.

Morgan's goals, however, provided a necessary cushion over a talented Haiti team that gave the Americans trouble and -- for the first time in a meaningful match -- asked questions of the United States' rebuild ahead of the 2023 World Cup in Australia and New Zealand.

"I think we need to build on this," Morgan said postgame. "Obviously, we got the win, got a few goals in, but at the end of the day, we did give up a penalty, we had a couple offside goals. So, I think we can be a bit cleaner. I think it's a long tournament, so it's a good start overall."

A five-minute stretch of pressure from Haiti to end the first half nearly saw the game go to the break level at 2-2. U.S. goalkeeper Casey Murphy made a game-defining save in the 37th minute, denying Melchie Dumornay one-on-one, and then Murphy got help from the post on a penalty kick five minutes later. Both opportunities resulted from Haiti opening up the United States centrally and winning individual duels.

ESPN FC Women's Rank: The best 50 players in the world7dESPNHuge summer of women's soccer: Your guide to Euros, USWNT qualifiers and more11dESPNGustavsson should remain at Matildas helm, but excuses are starting to grate4dJoey Lynch

Dumornay twice froze veteran U.S. defender Becky Sauerbrunn in her tracks on those plays, including the sequence that led to the penalty kick for Haiti.

Sauerbrunn's fellow center back Alana Cook was pulled high out of position on those plays and other occasions, and the U.S. was largely disconnected in central areas.

"I don't know if there was a miscommunication or anything going on between our center backs," U.S. coach Vlatko Andonovski said postgame. "I would say it was the really good play of our attackers on the other team. Like I said, [Roselord Borgella and Dumornay] are world-class players, and if you give them a little space or a little time, they will expose you, they will expose any defenders."

Kethna Louis nearly gave Haiti the lead seven minutes in when she drifted from her defender on a free kick and sent a header just wide of goal. Per TruMedia, Haiti ended the first half with a superior expected goals figure to that of the U.S. (0.95 to 0.87), a depiction of just how tight things were -- and how much Morgan's tallies were needed.

Some of these growing pains are to be expected. Cook started a qualifying match for the first time, and she is among the players whom Andonovski wants to put in pressure-filled situations so that they can be ready for next year's World Cup. Balancing that growth with the demand for results at a qualifying event is difficult.

Still, there are concerns about the United States in the center of the park heading into that 2023 World Cup, and they stem from more than just one game against Haiti. Sauerbrunn, the captain, just turned 37. Even in her prime, when she was one of the best defenders in the world, she was a cerebral player who read the game as well as any player on the field more than she was a defender to chase down players in the open field.

She paired perfectly with Julie Ertz (née Johnston) at the 2015 World Cup and, backed by goalkeeper Hope Solo, the U.S. put together a suffocating defensive effort -- a record-tying 540-minute shutout streak -- to win that tournament. Four years later, Ertz played as the bruising, ball-winning defensive midfielder providing cover in front of Sauerbrunn and Abby Dahlkemper as the Americans repeated.

The USWNT's 3-0 win on Monday was closer than the scoreline suggests, with Haiti continually able to expose the Americans in central areas. Jaime Lopez/Jam Media/Getty Images

Now, Sauerbrunn pairs with either Cook or the more offensively aggressive Naomi Girma (while Dahlkemper is returning from injury). Most of the Americans' defensive agility is concentrated on the flanks, with fullbacks Emily Fox and Kelley O'Hara. Ertz also hasn't played since the Olympics and is expecting her first child this year; her playing future is unclear.

Andi Sullivan is now the preferred No. 6, according to Andonovski, and she offers a very different profile from Ertz, one of a deep-lying distributor. That will benefit the U.S. at times, but on Monday, Haiti highlighted how that system could be exploited. Sullivan struggled defensively to handle Haiti's speed of play in the middle of the park, Cook was too often pulled high up the field, and that left Sauerbrunn in one-on-one matchups with a player (Dumornay) who is half her age. Dumornay's big opportunity in the 37th minute captured all of these things in one play.

"Obviously, that's part of the game that I didn't feel like we did good enough," Andonovski said of Haiti's ability to counterattack. "Part of it was because we wanted to bring numbers up going forward and create overloads in different areas of the field. Mathematically, when you create numerical superiority in any part of the field, that means that you're gonna give up superiority somewhere else. I thought they were able to expose that area of the field, and that's something that we're going to have to look at and do better the next game."

Ertz's absence hit hard last year, as well, when she was injured and the U.S. tried to adapt without her (and without Sullivan, at the time). Personnel combinations were different in the opener of the Olympics last year, but the 3-0 loss to Sweden exposed similar issues centrally. The Americans have long been intimidating and unmatched up the spine of the field; now, they are trying to rediscover their identity in that crucial area.

There were positives on Monday, of course. Murphy's huge save validated Andonovski's decision to start the relatively inexperienced (but in-form) 26-year-old over 2019 World Cup winner Alyssa Naeher, who has been the team's No. 1 for nearly four years. At a minimum, the emergence of Murphy could give the U.S. more than one goalkeeper with relatively big-game experiences for the first time in what feels like forever. Naeher got injured in the Olympics semifinal last year, and Adrianna Franch was thrown into her first major game at a crucial moment.

Morgan's return to international form also firmly answers any lingering questions about the United States' No. 9. Her 15 goals in 17 NWSL games this year should have answered that, anyway, but Monday was her first multigoal game in a U.S. uniform since the 2019 World Cup. Her first goal on Monday was particularly cheeky, an outside-of-the-boot flick at the near post to deftly beat the Haiti goalkeeper.

Morgan and Sauerbrunn know better than most on this current U.S. roster how fine the margins are at this level. They are two of only a few remaining active players from the Americans' 2010 World Cup qualifying disaster in Mexico, when the Americans had to beat Italy in a two-leg playoff to make the 2011 World Cup. They made the final of that edition and then won the next two.

At next year's World Cup, the U.S. could face strikers such as France's Marie-Antoinette Katoto and Norway's Ada Hegerberg. Dumornay is more talented than most of the world knows, and if she's asking serious questions of the U.S. defensively, others will be too.