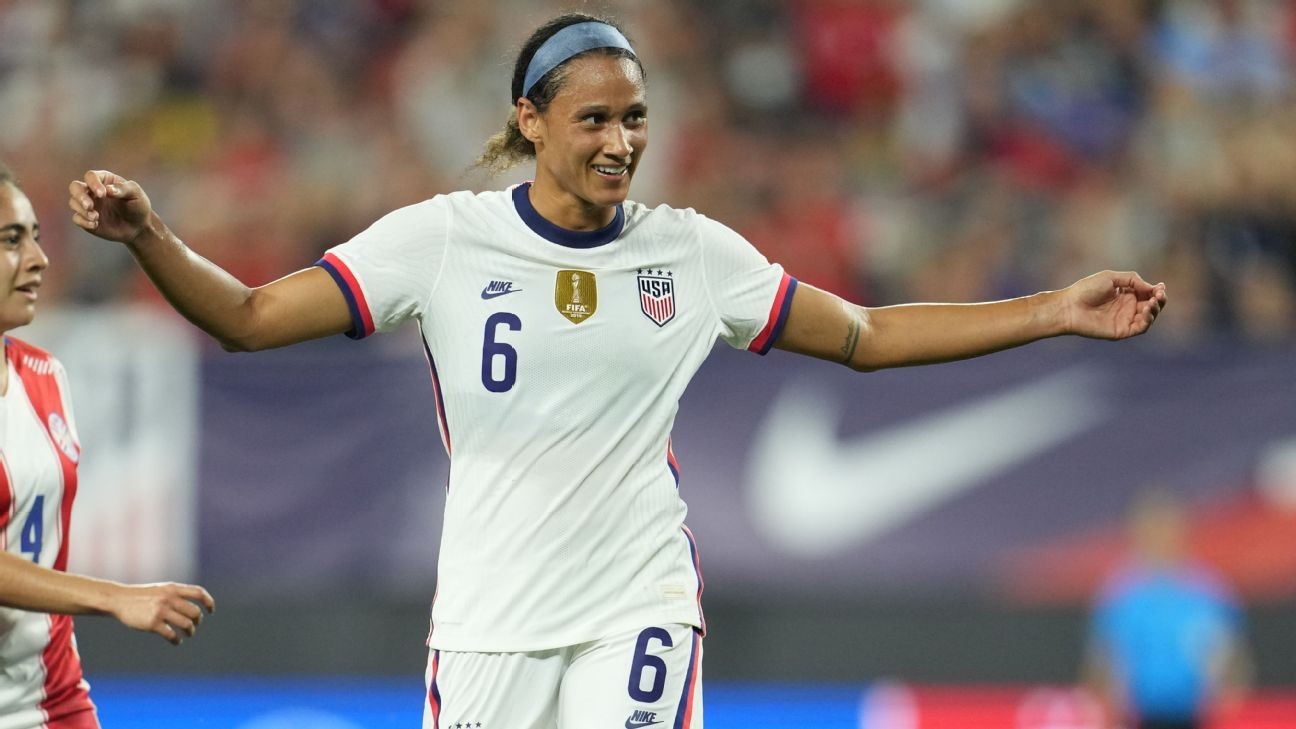 Williams was initially on the alternates' list for the Tokyo Olympics, but ended up being included and playing three games, scoring vs. the Netherlands in the quarterfinal. Brad Smith/ISI Photos/Getty Images

The past year has been a journey for Lynn Williams. Last summer, as Black Lives Matter protests swept the country following the murder of George Floyd, she was part of a group of Black players in the National Women's Soccer League (NWSL) who established the Black Women's Player Collective. The COVID-19 pandemic -- which had kept her from seeing her boyfriend for more than a year -- was ongoing and the Olympics were looming.

A few months before Tokyo 2020, she could feel the early kicks of self-sabotage hitting in. She'd worked her way back into the United States women's national team after narrowly missing out on the 2019 World Cup squad, but she could feel the self-doubt setting in ahead of another big roster announcement.

"I recognised a pattern in myself where I was self-sabotaging," she told ESPN in early September. "Where things were going so well for me and I would second guess myself so much and ask, 'Why am I getting these opportunities? Why? Why? Why?' Instead of just saying, 'I deserve this.'"

A self-confessed "underdog," Williams started working with a sports psychologist and together, they talked through and imagined every possible scenario: Making the Olympic roster, not making it, what it would feel like to have a gold medal around her neck, what it would feel like to be watching the drama unfold from home. When USWNT head coach Vlatko Andonovski announced Williams as an alternate -- one of the four players who would travel to Tokyo in the event one of the 18 rostered players got injured or couldn't play -- she was disappointed, but analysed how this changed her role. She focused on what she could do to help her teammates.

"I thought my role was to go in and be a supporting role. Somebody who was going to help out the team in a different way to how I've ever had to do before," she said. "I was accepting of that role and I was saying, 'I need to be the best Lynn so that when we're training, I can help my backline. So I can say to them, 'If you see this run, this is what you're going to do. If you see this, do X-Y-Z.'"

However, Williams' role in the tournament became far more crucial than merely helping her teammates run drills. Ahead of the competition, the International Olympic Committee changed the roster numbers from 18 to 22 -- several countries, including the USWNT, had asked the IOC to expand the rosters to allow for challenges faced by teams with the COVID-19 pandemic -- which meant she was now part of the full squad. Prior to this, she limited minutes in the group stage, coming on for 16 minutes during a 0-0 draw with Australia. Of all the scenarios she had worked through before the tournament, starting an Olympic quarterfinal was the one that took her by surprise.

Post-Olympics, she can reflect on this opportunity and how she grabbed it. Going from an alternate to a key player who helped the team secure a knockout win has been invaluable for her confidence moving back into the NWSL season with the North Carolina Courage, and looking ahead to the next year with the USWNT, as Williams was also named among the 21-player squad for the final of Carli Lloyd's international games before her retirement.

"I think the biggest shock for me wasn't necessarily the fact I thought I was going to [be on the] roster because I kind of knew I was going to [make it] for one of the games," she said.

"Vlatko had said he was going to make sure all of us rostered that were alternates. The shocking part was knowing that I was going to start. I didn't find that out until one of the meetings and he said my name in the starting lineup and thank goodness I was wearing a mask because I was so happy and so shocked.

"I was like, 'What? Are you sure?' Obviously so incredibly excited, but I came as an alternate. I didn't know I was going to be starting."

It wasn't just the fact she would be starting in an Olympic match either. It was a quarterfinal and the USWNT had been having an unconvincing tournament up to that point. They had made it to the knockout stages, but questions remained over the team's mentality and whether they were up for the job against old rivals, Netherlands.

Williams is also enjoying a strong season with the North Carolina Courage, with seven goals and two assists as the team pushes for a spot in the playoffs. Andy Mead/ISI Photos/Getty Images

If there was a word to describe Williams' tournament and the lead into it "adapting" would probably be it and nowhere did she prove it more than in the quarterfinal, repaying Andonovski's faith in her with a crucial goal and an assist. The game against the Netherlands finished 2-2 and the USWNT went through on penalties. The months of hard work and doubt had finally culminated in her shining moment.

"When I got the call to be on the field I had to quickly change my mindset to, 'OK my team needs me to provide for them.' If that's defensively, if that's crosses, if that's scoring goals, whatever it is I needed to get on my A-game because that is what my team needed me to do," she said.

"My sports psych definitely helped me with that. But I think that's a little bit in me as well. Whatever the team needs, I'm there for."

While she may not have walked away with a gold medal -- although, she did describe the USWNT's bronze as "rose gold" in a post celebrating the team's accomplishments on Instagram -- she did show the world that she is a big tournament player and perhaps banished some of her own doubts in the process.

Now, back with the North Carolina Courage after some time with her family in California, her mind has switched to making the NWSL playoffs -- with an eye always on returning to the national squad to help them secure a spot for the 2023 World Cup as well as competing in the friendlies and Cup matches in between -- and growing the Black Women's Player Collective.

Julie Foudy reacts to Lisa Baird's resignation as NWSL commissioner after the latest allegations of abuse in the league.

Groups like this have established an even more important place in the league in recent weeks after the revelations in the Athletic of systemic cases of bullying and sexual coercion in the league. The NWSL Players Association has been a strong voice for player rights throughout the scandal and as the league continues to reckon with the full fallout, a variety of voices will be needed.

The group, set up last summer as protests about police brutality against Black people spread across the United States and Europe, has already been implementing changes in the league and around the country. They've conducted surveys on diversity issues within the NWSL, facilitated diversity workshops, built mini-pitches to get more kids playing soccer and are looking to grow in any way they can. In recent weeks, they've launched a new logo as well as a partnership with Adidas.

"When I was growing up, there weren't that many Black players or players that looked like me playing and if I would have just let that deter me from playing, I wouldn't be at the point I am in my career. I hope that little girls and honestly little boys too see us and say there's somebody that's fighting for me," Williams said.

Williams and her co-founders have big dreams for the collective. While she admits it is small at the moment, it is growing and they are already seeing the impact they're having. But there's still a long way to go. "We're not anywhere near where we need to be, but I think I'm more just proud of the organisation and the Black players for not just sitting back and taking and accepting where we're at," she said.

Williams' mantra at the Olympics was simple: 'Whatever the team needs, I'm there for.' In the end, the USWNT rallied from an opening game defeat to win the bronze medal over Australia. Atsushi Tomura/Getty Images

"I obviously play soccer because I love it, but if I can inspire only one person, I think I have done my job. I'm really excited to see where that goes. It has already gone so far in one year, I can't imagine where it is going to in two, five, 10 years from now."

On Sept. 30, the Athletic published an explosive report that implicated (now-former) Courage coach Paul Riley in over a decade of sexual coercion and abusive behaviour towards players. The detailed report, which included a dozen former players of his across multiple clubs, forced the NWSL to answer as to why it had allowed several coaches with allegations against them -- Riley had been investigated in 2015 -- to continue to work with women.

Since the story broke, NWSL commissioner Lisa Baird and general counsel Lisa Levine have resigned due to their failure to follow up with requests to reopen the Riley investigation. The NWSLPA has set out a series of demands for the league and clubs to fulfill while also providing a hotline for players who want to report issues they have experienced. In a very public show of solidarity, games were halted in the sixth minute of matches after the allegations were revealed and players joined arm-in-arm in a show of solidarity with those who had come forward. Mana Shim, one of the players who came forward publicly against Riley, stood on the pitch with Alex Morgan and other players during the Orlando Pride's match against NJ/NY Gotham.

The same week as the Riley allegations came into sharp relief, Washington Spirit coach Richie Burke was banned from ever working in the league again after an investigation found he was emotionally and verbally abusive towards players. The investigation was launched after former Spirit defender Kaiya McCullough went public with Burke's treatment of her.

The ongoing revolution in the NWSL has been player-led, with former and current athletes continuing to speak out through player groups and with the support of teammates. Now, more than ever, groups like the Black Women's Player Collective are important in developing a league that's safe and welcoming for all.