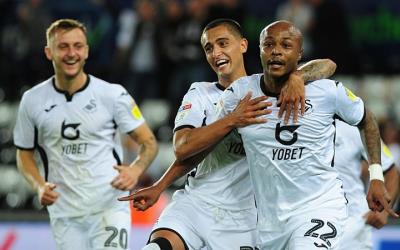 Ghanaian international, Andre Dede Ayew climbed from the bench to score twice to help Swansea City post a 3-1 win over League Two side Northampton Town in the Carabao Cup yesterday.

The two lower division clubs locked horns in the first round of the English cup competition but the Championship side almost suffered elimination after conceding the first goal of the match.

The Black Stars captain was introduced late in the second half but inspired a comeback to help the Swans dispatch their opponent.

A goal on the 80th minute canceled Matt Warburton equalizer to give keep Swansea in the tie.

Andrew Ayew completed his brace in the dying minutes of the match with a fine header after George Byers had scored to give the victors a 2-1 lead. The match eventually ended 3-1 with the Championship side progressing into the second round of the Carabao Cup.

Steve Cooper and his men will now face Cambridge United in the second round of the competition.

Watch highlight of Ayew’s brace in the video below.