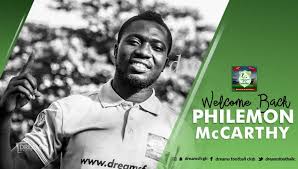 Dreams FC have confirmed the signing of Philemon McCarthy ahead of league resumption.

McCarthy penned a two-and-a-half-year deal with the Still Believe after successful negotiations.

The club's official statement reads; "Dreams Football Club is pleased to announce the return of its very own Philemon McCarthy after the experienced goalkeeper signed a two and half year contract with the club."

The former Hearts of Oak shot-stopper's comeback is considered as a homecoming signing since this becomes the second time he is rejoining the club following his earlier return in 2018.

Watch below highlights of McCarthy: