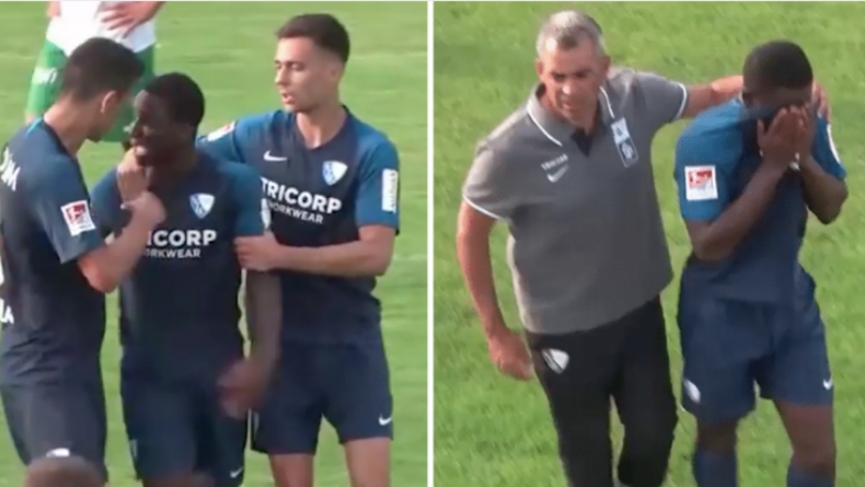 English-born of Ghanaian descent Jordi Osei-Tutu walked off the pitch in tears after being subject to racial abuse during a pre-season game.

The 20-year-old, who is currently on loan at German side VFL Bochum, was making his first appearance for the club against Swiss side St Gallen when an opposition player allegedly abused him.

The on-loan Arsenal defender protested to the referee and soon left the field of play, although he reportedly returned in the second half.

Arsenal have since released a statement condemning the incident:

"We are working closely with Bochum and Jordi and we are giving him our full support."

"Racism has no place in our game and we do not tolerate any form of discrimination."

Osei-Tutu has also spoken about the incident on his VFL Bochum debut:

"I am very disappointed about what happened," he said.

"No one should ever be subject to any discrimination and it is really hard to understand how a fellow professional footballer could do this.

"Arsenal and Bochum have provided great support to me and I hope that if nothing else, we can show that racism has no place within football."

Football equality organisation Kick It Out have since commented on the incident as well:

"Before the new season has even begun a young player has endured sickening racist abuse," they said.

"If anyone is in any doubt about the devastating impact such abuse can have, look at the footage of Jordi Osei-Tutu.

"After last season we can only hope this is not a grim sign of things to come. We have offered support to Jordi alongside Arsenal FC, his parent club."