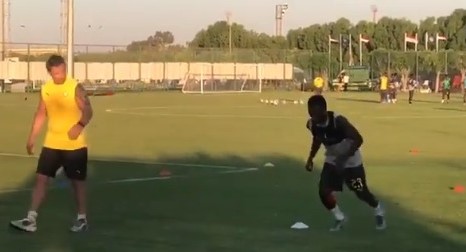 Ghanaian International, Thomas Agyepong has on Friday, July 4, 2019, begun training in a bid to get back to full fitness after making an injury return to make him available for selection for the next Black Stars match.

The young pacey attacker picked up a knock during Ghana’s opening match of the ongoing 2019 Africa Cup of Nations (AFCON) tournament where they drew 2-2 with the Squirrels of Benin.

The injury from that match ruled him out from the next two group F matches of the Black Stars which they eventually managed to pick up enough points to secure them qualification into the last 16 of this year’s tournament.

Having recovered from the injury though, he had to train individually under the supervision of the team’s physical trainer as he seeks to get back to full fitness to ensure he gets to feature for the West African side when they come up against the Carthage Eagles of Tunisia.

That crucial game will come on at the Ismailia Stadium on Monday, July 8, 2019.

Midfielder Thomas Agyepong trains individually as he aims to recover from his injury in time for upcoming matches #TOTALAFCON2019 #BLACKSTARS pic.twitter.com/WeRI0Oj8yj