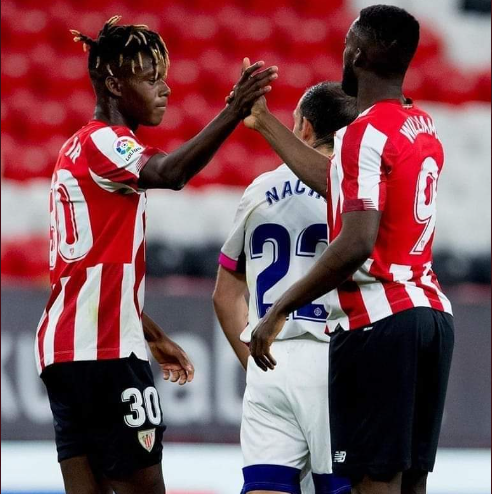 Inaki Williams and his brother, Nico Williams were both on the scoresheet as Atheltic Bilbao came from behind to beat Rayo Vallecano on Saturday.

In the Round 6 games of the Spanish La Liga, Bilbao hosted Vallecano at the San Mamés Barria.

Argentine forward, Óscar Trejo broke the deadlock for the away side in the 5th minute.

However, Ghana striker, Inaki Williams scored in the 14th minute from a counter-attacking play.

However, Bilbao dominated the game and again found the back of the net through Oihan Sancet in the 28th minute.

In the 33rd minute, Nico Williams scored a sensational goal to make two goals out of two games.

In the 80th minute, former Chelsea and Manchester United striker Radamel Falcao scored for the away side to end the game 3-2 in favor of Athletic Bilbao.

Meanwhile, Ghana defender Abdul Mumin made his debut for Rayo Vallecano after being introduced on the 80th minute.

Inaki Williams has been named in Ghana's squad for the pre-World Cup games against Nicaragua and Brazil later this month and he is expected to make his debut for the Black Stars.

However, Nico Williams, who has been on the radar of the Ghana Football Association [GFA] has been named in Spain's squad for their UEFA Nations League games against Switzerland and Portugal.

Watch Inaki and Nico Williams' goals for Athletic Bilbao against Rayo Vallecano in LaLiga below: