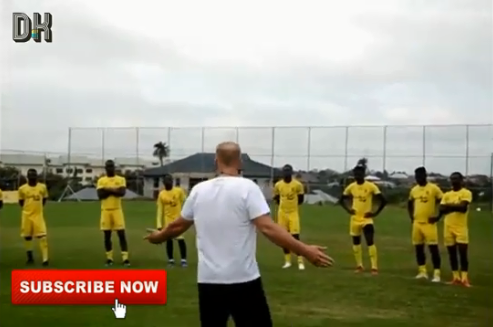 New head coach for Kumasi Asante Kotoko, Kjetil Zachariassen has started training with the team as they begin preparations ahead of the 2019/2020 season where they will be participating in the CAF Champions League.

The former Obuasi Ashanti Gold manager penned a three-year contract with the Kumasi based side over the weekend and has been tasked to build a formidable side that will be able to compete and thwart the best clubs from Africa when they begin their continental campaign.

The Norwegian tactical who replaces Coach CK Akonnor met with his new players on Monday after to interact and begin training for the task ahead.

Speaking to the lads for the first time, Coach Kjetil Zachariassen shared that he is going to ensure he improves all of the players to be able to win trophies for the club.

He noted, “I'm going to make a better football player than you are now. That is my belief and I know we are going to win trophies together as long as you listen to what we tell you”.

Watch a video of the early interaction between the gaffer and his players yesterday.