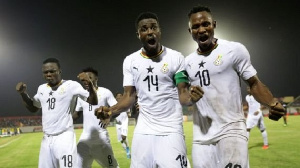 AshantiGold midfielder Shafiu Mumuni  scored a sensational hat-trick to send Ghana into the final of the 2019 WAFU Cup of Nations after beating Ivory Coast 3-1 in the semi-final at the Stade Lat Dior in Thies, Senegal on Tuesday night.

The Black Stars took the lead in the 30th minute when Joseph Esso fired in a ferocious shot from just inside the penalty area and Shafiu threw himself at the Constant Kouame clearance to put the ball into the back of the net.

Shafiu doubled Ghana's lead immediately after the recess with just 30 seconds into the second 45 minutes.

It did not take long for the skipper to bag his hat-trick of the night as his brilliant header beat off Tape in the 51st minute.

Ghana now await the winner between Senegal and Mali in Wednesday's other semi-final clash in the final on October 13.

Watch below video of Shafiu's hat-trick against Ivory Coast: