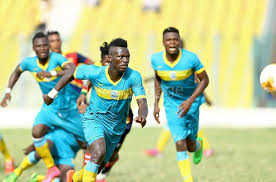 Wa All Stars striker Richard Arthur will join Asante Kotoko on a short term deal, this is according to the club's General Manager Seth Panwumi.

Kotoko are in the market looking for attackers following their low conversion rate in the ongoing Ghana league.

“We have agreed with Kotoko and Richard Arthur will be joining them soon. He (Richard Arthur) will join Kotoko until the end of the current season,” Panwumi told Sportscrusader.com.

‘The signing of the contract will be done by the end of the week, the player has already agreed terms with them.”

Arthur who has scored four goals for All Stars will be Asante Kotoko first signing since the window opened.

He will join the likes of Obed Owusu, Abass Mohammed, Kwame Boateng and Yakubu Mohammed.