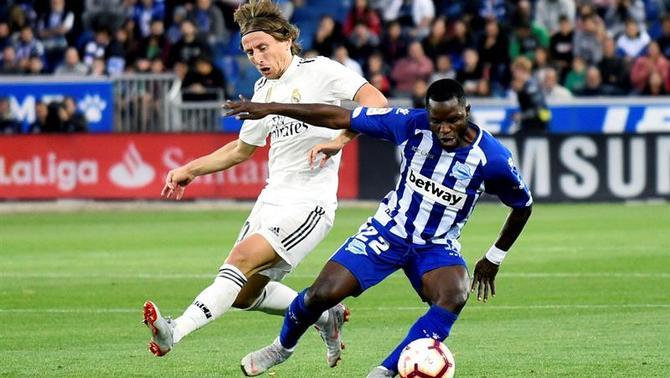 Ghanaian midfield enforcer Mubarak Wakaso featured for Deportivo Alaves earlier today when they suffered a 2-0 defeat at the hands of Real Madrid in the Spanish La Liga.

In a match week 15 fixture played at the Estadio de Mendizorroza, the home side fought hard but their efforts were not enough as the Spanish giants grabbed all 3 points at stake.

The first half of the match ended goalless with the Los Blancos dominating in all departments.

An improved performance in the second half produced the first goal when Real Madrid captain Sergio Ramos headed home a well-struck free-kick from Toni Kroos on the 52nd minute.

A resilient performance from there on saw Deportivo Alaves drawing level on the 65th minute after they were awarded a penalty kick for a silly offense committed by Sergio Ramos.

Striker Lucas Perez stepped up and expertly converted to make the scoreline one-all.

Several changes from Real Madrid manager Zinedine Zidane helped to produce the second goal with defender Dani Carvajal getting on the scoresheet on the 69th minute.

Wakaso who excelled through the first half and most parts of the second half was substituted on the 82nd minute with Manu Garcia taking his place.

The Black Stars midfielder continues to impress for Alaves in the La Liga and has established himself as one of their key players.