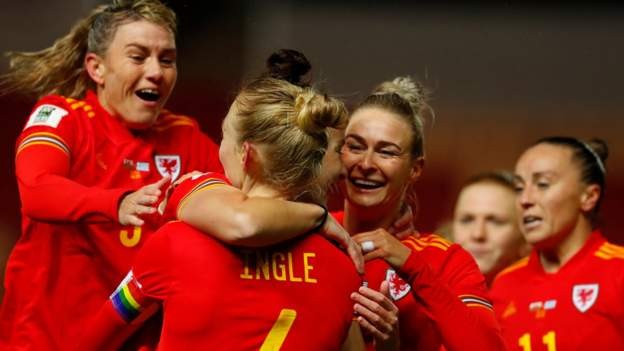 Wales cruised to a 5-0 win over Greece to maintain the positive start to their 2023 World Cup qualifying campaign.

Midfielder Ceri Holland scored twice, either side of the break, on an evening where Wales dominated throughout.

Captain Sophie Ingle gave Wales the lead after seven minutes in Llanelli as she fired home after a fine team move.

Kayleigh Green added a second as she took advantage of a defensive mix-up, while Natasha Harding headed home a fifth goal from close range.

Wales' dominant display keeps them in second position in World Cup qualifying Group I, two points behind leaders and favourites France, who Wales visit on Tuesday, 30 November in their next qualifier.

This was a night where only a win would do for Wales and they never looked like slipping up against a Greece side who rarely managed to test goalkeeper Laura O'Sullivan.

Wales were without a key player as Reading midfielder Rachel Rowe is still ruled out by the hamstring injury suffered in training on international duty last month, with Tottenham defender Esther Morgan deputising for her at left-back.

Brighton striker Green returned from suspension and she was a focal point for Wales from the get-go with the conditions at Parc y Scarlets extremely difficult as both rain and snow lashed down, with the Greek players visibly shivering during the national anthems.

Wales' early pressure led to a breakthrough after seven minutes when Ingle finished a fine move that saw Jess Fishlock find her late run after Natasha Harding's cross from the right.

Ingle showed fantastic composure to fire home just her fourth international goal as she scored in back-to-back games for the first time for her country, curling the ball home from the edge of the penalty area.

The goal allowed Wales to continue to play aggressively and look to win possession in advanced areas and they added a second goal thanks to Green's tenacity.

There appeared little danger as Maria Palama passed back to goalkeeper Anthi Papakonstantinou, but the ball held up on the wet pitch and Green exploited the situation, dispossessing Papakonstantinou and tapping into an empty net.

Wales had their victory essentially secured after 25 minutes when Ceri Holland's shot proved too powerful for Papakonstantinou to handle as the ball squirmed into the net.

There was no let-up to the poor weather with the rain and sleet making conditions extremely difficult as Wales attempted to bolster their goal difference.

Wales' most-capped player Jess Fishlock missed a golden chance to add a fourth before Holland doubled her tally for the evening with a fine finish as she cut inside and curled the ball around Papakonstantinou.

The Greek goalkeeper could also do nothing to prevent Wales' fifth goal as Harding headed home from close range after Rhiannon Roberts' pinpoint cross.

Substitute Carrie Jones almost added a sixth after replacing Holland while Wales' record scorer Helen Ward edged closer to the 100-cap club after being introduced for her 97th Wales appearance.

Fishlock was also denied by Papakonstantinou after a fine run and Roberts saw a header saved as the hosts looked for further goals, but boss Gemma Grainger was also able to bring off her key attacking players as she looks ahead to Wales' daunting visit to face group leaders France in Guingamp.

Attempt saved. Carrie Jones (Wales Women) right footed shot from a difficult angle and long range on the left is saved in the bottom left corner.

Attempt saved. Rhiannon Roberts (Wales Women) header from the centre of the box is saved in the top left corner. Assisted by Angharad James with a cross.

Attempt missed. Carrie Jones (Wales Women) right footed shot from the left side of the box misses to the right. Assisted by Angharad James.

Attempt missed. Helen Ward (Wales Women) header from the centre of the box is too high. Assisted by Rhiannon Roberts with a cross.

Esther Morgan (Wales Women) wins a free kick in the defensive half.

Ifigeneia Georgantzi (Greece Women) wins a free kick in the defensive half.

Attempt saved. Jess Fishlock (Wales Women) right footed shot from the centre of the box is saved in the bottom right corner. Assisted by Angharad James.