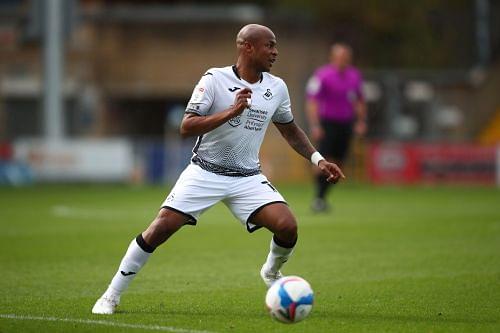 Andre, 30, was a key figure for the Swans last season, scoring 18 goals in all competitions.

Ayew already has extensive Premier League experience with the Swans and West Ham and is poised for a return to the top flight this week.

The 30-year-old has been an ever present for the Swans so far this season, scoring once during the club's impressive unbeaten start to the new Championship season.

But Swansea boss Steve Cooper is now facing an anxious wait to discover whether the club can keep hold of Ayew beyond Friday's deadline.

Cooper has already expressed his desire to work the Ghana captain despite the club's inability to book qualification to the Premier League.

"I look forward to working with Andre and hopefully he can play a part," Cooper said.

"I can have an understanding of that, but (will) focus on going forward," said Cooper.

"For me, the first part of the process with Andre was to have a conversation this week which went very well and I'm looking forward to him joining the training group on Sunday. Like everyone else, we work from there."

"He's had to do his testing and get himself up to speed," Cooper added.

"We need to make sure the performance staff are aware of where he's at physically and mentally as well."