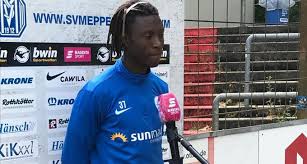 In-form striker Aaron Opoku believes that his team, Hansa Rostock deserved the victory over SV Meppen in the Bundesliga 3.

The two sides clashed on Saturday and Aaron made the headlines with a stunning brace to set Rostock on their way to victory. The 21 year old scored his fourth and fifth goals of the season in the 3-0 win.

After the game, the Ghanaian said that his team thoroughly deserved the victory as they dominated Meppen in all facets of the game.

"We made a very strong game. We took the lead early and added a goal straight away. We deservedly won. We don't have much time to celebrate, we have to stay focused," he told the media.

Opoku joined FC Hansa Rostock from Hamburg on a season long loan deal last summer. He has featured for Germany in the u 19 and u 20 levels but is still eligible to play for Ghana.