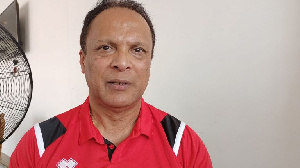 The Porcupine Warriors hired the former Black Stars coach before the start of the second hal;f of the Ghana Premier League.

He replaced Maxwell Konadu who was sacked on performance based after five matches into the 2020/21 Ghana Premier League campaign.

In an interview with Asempa FM, the former football agent disclosed his outfit decided hire a coach that can manage egos at the club as most of the players had got call ups into the Black Stars.

“The reason why hired Mariano was that at the time, most of Asante Kotoko players were getting called up to the Black Stars and we needed someone to manage the egos” he said.

Mariano Bareto guided Kotoko to finish 2nd on the league log in the just-ended season and are seeking to win the MTN FA Cup.

They will lock horns with Berekum Chelsea in the quarter-finals on Sunday.