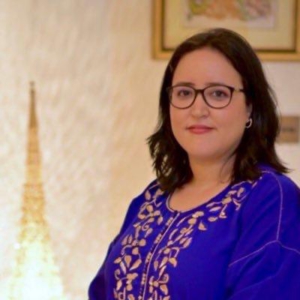 The North African country defeated Spain on penalty shootouts after a goalless draw to reach the World Cup quarter-finals at the Education City Stadium.

The two teams played out a draw after 120 minutes and Spain failed to convert any of their three penalties - goalkeeper Yaccine Bounou saving two - leaving PSG's Hakimi to win it with a nerveless 'Panenka' to spark jubilant scenes.

"The 30 million Moroccans are very very proud, well we haven't qualified to the second...since 1986 so this is a feat in itself. We are very very happy and more than 50, 000 people have made the trip to Doha to go and support the team. The coach Regragui said every time we play this is our last match so this is our fourth last match," she told Happy FM as monitored by footballghana.com

"Yes we have a little pressure from the Morocccan side, also from the African side and the Arab world too because it is also the only Arab team competing now. So we have make all these people proud it is a lot of pressure on the players on the coach and the team as a whole. But I think its is good pressure it makes us very happy that we have the African support around us,"

In the 1990 World Cup hosted in Italy, Cameroon became the first African country to play in the quarterfinals of the tournament.

In the 2002 global showpiece hosted in Korea and Japan, Senegal became the second African to play in the quarterfinals.

Ghana in 2010 in South Africa joined the historic list to become the third African side to play in the quarterfinals.

And in Qatar in 2022, Morocco has become the fourth African country to play in the quarterfinals.

Education City Stadium was filled mostly by Morocco fans, who went wild at the final whistle as their side reached the last eight for the first time