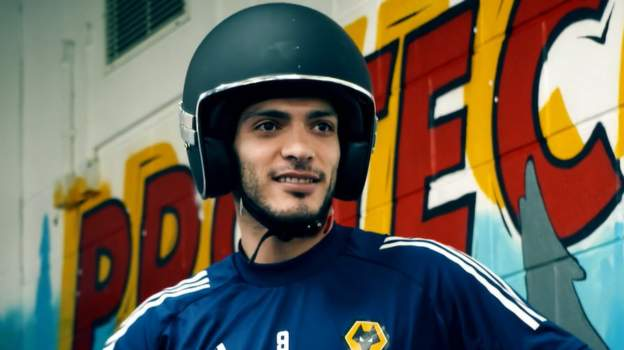 It is almost exactly a year to the day that Wolves striker Raul Jimenez suffered a fractured skull in a horrific collision with Arsenal defender David Luiz, sustaining injuries that could have killed him.

The dramatic tale of how team-mates feared for Jimenez's life as he laid prostrate on the pitch, and his remarkable recovery and return to Premier League action in the months that followed, is chronicled in a new BBC iPlayer documentary, Raul Jimenez: Code Red.

It was released on Saturday, the same day the 30-year-old Mexico international scored Wolves' winner against West Ham at Molineux and was saluted by the whole stadium singing his song, Si Senor.

Wolves captain Conor Coady, who was standing next to Jimenez when he was injured, tells BBC Sport about the journey that his team-mate and close friend has been on in the past few months, and what it meant for everyone at the club to see him regain his health and rediscover his best form.

The injury - 'We didn't know if he was alive'

On Sunday, 29 November, 2020, Wolves were playing Arsenal at an empty Emirates Stadium - the match took place behind closed doors because of Covid-19 restrictions - but in front of a TV audience of millions.

After 15 minutes, Arsenal won a corner and David Luiz and Jimenez challenged for the ball at the near post. There was an audible clash of heads, and the impact of the collision left Jimenez unconscious on the floor.

Conor Coady: I was standing right next to Raul when it happened. He was out cold and, straight away, I knew it was bad. Blood was pouring from his nose.

I'd done a few courses when I was an apprentice at Liverpool and remembered people saying that, when these things happen, you should just keep people on their side in the recovery position, so their airways are clear. That's why I told the other players to leave him.

But I'll be honest, in a scenario like that one you don't really know what to do. You just need to get the physios on as soon as possible.

It was the worst situation I've ever been involved in in my life, just to see a friend like that. Our medical staff are absolutely fantastic though and the doctor and the physios did an incredible job.

Coady (left) was one of the players on the scene who realised immediately how seriously Jimenez was hurt. He was treated on the pitch for 10 minutes before being put on a stretcher and taken to hospital

That night, after the game, the doctors kept me in the loop just so I could keep all the boys informed of what was happening to Raul.

Like I say in the documentary, it gives me goose bumps now just talking about it. We were all panicking, not about Raul the footballer and whether we would get him back, but about getting Raul the man back.

We just wanted him to be OK health-wise, because that was the most important thing - for his little girl Arya and his wife Daniela, for us... for everyone.

When I watched the film for the first time, I saw some pictures I hadn't seen before and it really hit home about what he went through and what kind of a character he is to be back playing now.

About three weeks later, Jimenez made an emotional - and unexpectedly early - return to Wolves' Compton Park training base, the huge scar from his head injury hidden under a woolly hat. His mobility was still impaired, but he was already thinking about his return to action.

We were training at the time and he just came over. He was chatting away and he was, well, he was normal. It was just brilliant to see. That was when I knew we had got him back.

At that moment, me and the rest of the boys did not care about football and if he ever played again, we were just glad he was here, he was smiling, talking and laughing with us and we could see he was all right.

Raul being Raul, though, it wasn't long until he was training with us again. That's just what he's always been like.

As the film shows, he is a massive part of our dressing room, first and foremost. But everything you see in the documentary is everything he is. He is someone I can can speak to about absolutely anything, but he is always willing to have a laugh too - I can guarantee you that.

Jimenez was given some stick by his team-mates because he had to wear a huge helmet in order to take part in their head-tennis competitions during his rehabilitation, and it gave him something of an advantage. Coady told MOTD2: "He was smashing the balls, winning every point - all the lads were going 'this isn't right!'"

I've spent a lot of time with Raul and he is always so warm in the way he speaks to you, which is why we were such close friends in the first place.

He tries to affect the people around him in the dressing room and he's the same on the pitch, with his work-rate.

He's been the same since he joined Wolves, in 2019, with what he gives us in training every single day as well as in games. That's the sort of stuff people don't usually see, but his willingness to work is something that has always stood out.

To have him back around the place was fantastic, even if he was just on an exercise bike or jogging around the pitch while we trained.

I think the documentary shows his bravery and his character, not only to get through what was possibly the worst injury you could get playing football, but to do it and still be himself.

The return - 'I just feel pride more than anything'

Only eight months after the incident, Jimenez was back in the famous old-gold shirt, walking out to play in Wolves' opening game of the season at Leicester on 14 August.

His first goal since returning to action came a few weeks later, with the winner against Southampton on 26 September, and they have kept coming since - for club and country - Saturday's strike was his fourth of the season for Wolves and Mexico.

Conor Coady: I'd been on at the doctor for a while at the end of last season, asking how long it would be before Raul was back. I was probably being selfish, but only because I knew the difference he makes to our team - he helps us win games.

It was very special just to have him back playing for us, but, these past few weeks we are starting to see Raul back as the player he was before his injury, and it is just a pleasure to see.

He's a world-class striker, and you've seen how much we missed him when we lost him last year. But the things he is doing for us as a team at the moment are just incredible.

Even when he's not scoring goals, he sets everything up for us with the way he goes about things. Out of possession, it starts with the press - he knows how to do it as well as when to do it, and he is always the first one defending from the front.

Then there are his goals. His first goal since coming back, at Southampton, was like the Raul of old - he beat a couple of men and put it in the corner. Then there was that little chip against Everton which he took so well and his strike on Saturday which was just out of this world.

To see him back at this level and in this condition, I just feel pride more than anything because I have known him a long time and obviously I know what he has been through.

I hope he knows how much his team-mates love him and what the fans and everyone at the club thinks of him - they adore him, as a player and a person.

The fans sing his song a lot now, which is fitting I think, because we spent so long without any supporters at games while he was out.

They would have been singing his name when he wasn't playing, so to hear it now he is back means a hell of a lot to everyone.

301 days after his injury, Jimenez scored his first goal since returning to action - the winner at Southampton