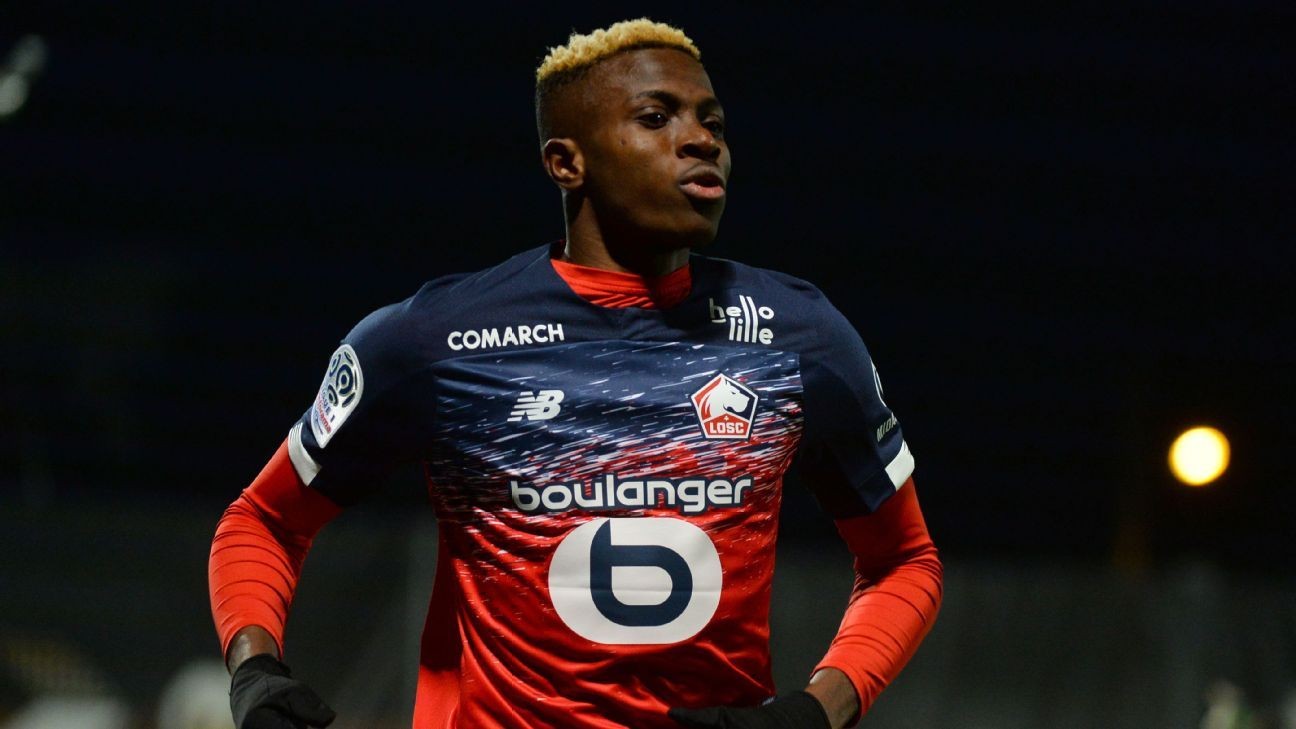 Editor's note: Tor-Kristian Karlsen is a Norwegian football scout and executive and is the former chief executive and sporting director at AS Monaco. He will write regularly for ESPN on the business of soccer and the process of scouting. In his latest column, he looks at some of the game's top young talent changing clubs this summer and how they'll fit at their new clubs.

At the end of April I nominated my top talents aged 21 or under in world soccer, and several of them are already on the move. It seems that in this COVID-19 affected world, clubs are seeking more value for money in their acquisitions, sparking an increased interest in youth. With less initial outlay compared to signing established top names and a bigger potential sell-on value, it makes financial sense even if it might take younger players a little more time to find their feet and make an impact.

While Sancho and Havertz -- probably the most coveted from that list -- are reportedly close to big-money transfers to Manchester United and Chelsea respectively, three young stars definitely on the move are Victor Osimhen, Achraf Hakimi and Ferran Torres.

Here's what they will bring to their new teams, and how they might fit.

Victor Osimhen: Napoli's gain is everyone else's loss Osimhen will fit nicely into Napoli's attack and is considered one of the smartest transfers of the summer. JEAN-FRANCOIS MONIER/AFP via Getty Images

Osimhen has, perhaps somewhat surprisingly, joined Napoli from Lille in a reported €70 million deal -- a club-record signing for the southern Italian giants -- which could rise thanks to another €10m in add-ons.

The Nigerian centre-forward was briefly linked with Liverpool, and the Premier League had seemed a more likely destination for the 21-year-old. With his recent emergence as one of the most exciting strikers in Europe, snapping up the Nigerian is a quite an achievement for Napoli, although the sheer magnitude of the deal is unexpected given the uncertainty of the financial impact of the COVID-19 crisis on the transfer market. However, Napoli are expected to recoup most of that fee from selling their Polish striker Arkadiusz Milik, who looks set for a move to Juventus.

Osimhen's most immediate challenge will be to adapt his direct and approach to attacking football -- something that worked well in the end-to-end, pacey environment of Ligue 1 -- to the more calculating and cagey nature of Italian football. The one-on-one situations from which he tends to leave defenders for dead will be fewer and farther between in Serie A.

At title challengers Napoli, he'll face teams sitting deeper than he's been used to while representing Lille, as the mid-lower table teams in Italy are far happier to defend a point all night than the more audacious "minor teams" across the border in France. And by the same token, in France he's used to taking few touches and to quickly spin and move towards goal, whereas he's likely to be drilled to hold up the ball more and be slightly more patient by his new head coach, Gennaro "Rino" Gattuso.

The Unbuyables: Bale, De Gea, Ozil among stars too expensive to shift

Still, Osimhen's straightforward approach to the game and the willingness to always look for the goal make the Nigerian such an exciting player. With his breath-taking pace and willingness to make deep, angled runs behind the opponent's defensive line, he will add another dimension to Napoli when playing on the break. Though he does require space to take full advantage of his most remarkable qualities (pace, power) his finishing technique is steadily improving.

In addition to his excellent work ethic -- Osimhen is never worried about putting in a shift for his team -- he's one of relatively few forwards at the top level who seem to consistently create chances from successful counter-pressing, robbing the ball off defenders while building from the back. Furthermore, in the mould of Liverpool's Sadio Mane, he's equipped with excellent coordination and control of his body, which allows him to stay on his feet despite taking knocks that would unbalance other players. If Gattuso sticks with his 4-3-3 formation next season, Osimhen would most likely start as a central striker or wide on the right, as there will be occasions where space will open up for him to make better use of his explosiveness in wide areas.

The noises from sporting directors, scouts and agents in the European game suggest that by signing Osimhen -- although by no means on the cheap -- Napoli struck while everyone else was asleep.

Achraf Hakimi: A good fit for Inter's style Hakimi's brilliance on either side of the ball should fit nicely in Inter's approach and what Conte demands from his wing-backs. Alexandre Simoes/Borussia Dortmund via Getty Images

Also heading to Serie A is the former Real Madrid right-back. The Spain-born Moroccan international, fresh from spending two successful seasons on loan at Borussia Dortmund, has committed himself to a five-year contract with Inter Milan. And as with Napoli's new star signing, Hakimi's transfer to the Nerazzurri has stirred some minor disbelief on the football scene.

Some are wondering why, as one of the top performers in his position in Europe last season, the player didn't hold out for an even bigger club (with all due respect to Inter) or indeed why Real Madrid decided to let him go permanently. Although the Spanish champions will never struggle to assemble a world-class squad, it'll be interesting to see how they fill their right-back slot in the years to come with what they presumably consider as potentially better options.

Hakimi's attacking threat as a right (or occasionally left) wing-back has been well-documented in the Bundesliga and in European competition. Last season's tally of nine goals and 10 assists (all competitions) is impressive and for someone who came through the youth ranks as a defender, he's exceptionally good at timing his runs into the box from deep positions to finish with precision or power.

Similarly, he's able to combine efficiently with attacking midfielders or forwards in order to create numerical advantages in advanced areas. As opposed to many other wide players, he tends to hit his crosses low, preferably between the goalkeeper and the trailing centre-backs, making his deliveries very hard to defend.

While there can be no doubt about Hakimi's attacking credentials -- nor his electric pace or determined running both on and off the ball -- he's likely to reach for the handbrake slightly more often now that he's a Serie A player. While Inter head coach Antonio Conte encourages a high-energy, attacking style of football, he'll be aware that the €40m signing is prone to leaving gaps behind him, and that those gaps are likely to be exploited even more brutally in Italy than in Germany. Even the less fancied Serie A sides are traditionally good at finding the weak spots to repeatedly target -- and punish -- teams on the break. It's always better to keep an extra eye on the balance of the team and who is there to cover, before darting forward.

Yet in spite of the defensive question marks, Conte -- who has previously fielded midfielders and attacking players such as Andrea Candreva and Victor Moses as wide wing-backs in his 3-4-3 system -- now has the privilege of working with an exceptionally talented 21-year-old who's already accustomed to the role.

Ferran Torres: Promising winger should get time to develop Man City Torres will be a long-term project for Man City and Pep Guardiola, given his raw skills and his versatility across the attack. He'll be given time to develop before becoming a first-team fixture. Jose Miguel Fernandez/NurPhoto via Getty Images

There's also plenty of excitement in store for Manchester City with the arrival of the Valencia winger Ferran Torres, which looks set to be concluded within the coming days. With Leroy Sane joining Bayern Munich and David Silva looking for challenges elsewhere, Pep Guardiola has identified the Valencia wide man as the right candidate to add creativity to his attack.

How Guardiola plans to use the Spain U-21 international is anyone's guess, but Torres has most commonly been used as a traditional right winger, preferring to take on defenders on the outside and look for opportunities to cross, rather than involve himself too much in build-up play from central areas. However, as was the case with Raheem Sterling, Guardiola enjoys doing the final polish of the diamonds himself, and there's no doubt that Torres possesses the full skill set to play anywhere off the front man.

In addition to the trickery from wide positions -- mainly courtesy of his quick feet and excellent turn of pace -- Torres' lovely first touch also allows him to be creative and impact the rhythm of the game from the No. 10 position or cutting inside from the left. For all his sublime talent, he does not have the same natural intensity to his game as David Silva or Bernardo Silva and, as with any other 20-year-old, the Spaniard does drift in and out of games.

Perhaps more so than with the majority of Manchester City's recent signings, some months of adaptation should probably be expected before the Spaniard can be relied on for 90 minutes, week in week out. However, Torres's technical quality and footballing brain -- perfectly suited to Guardiola's flexible, attacking football -- are of such a high standard that the Manchester City head coach might soon have a dilemma as to which of his attacking midfielders joins Kevin de Bruyne on the team sheet.

Perhaps more so than with the majority of Manchester City's recent signings, a lengthy adaption period should probably be expected in this case. Nevertheless, the signing still represents good business at an initial €27m (plus potential bonus payments), the low fee due to Torres' refusal to extend his contract with Valencia that would have expired next summer.

Signing potential and looking for value isn't something we've necessarily associated with big-spending Manchester City in recent years, so the fact that they of all clubs seem to be reverting to such a policy is a hopeful sign for a healthier, more sustainable transfer market going forwards.