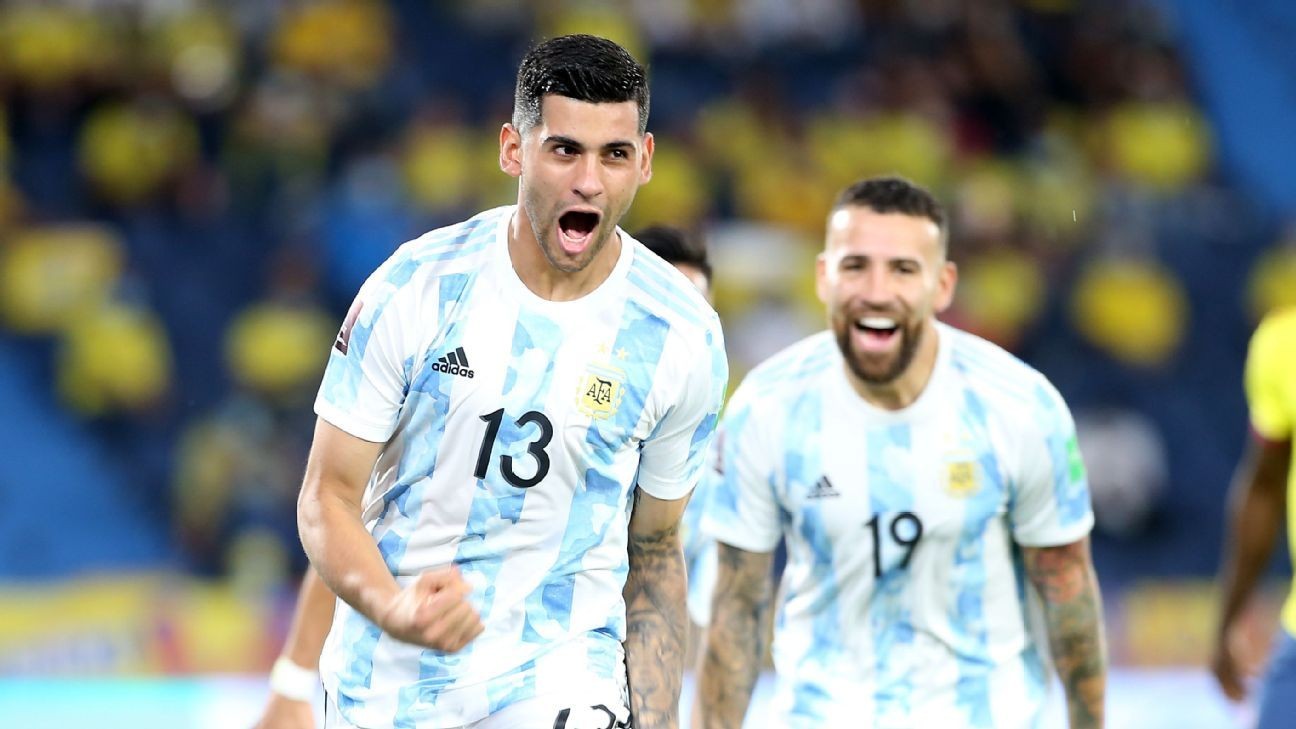 The delayed Copa America starts on Sunday, June 13 and there's plenty of talent on show among the 10 teams involved.

Who are the top young players to watch at Euro 2020?

While preparations for the tournament have been thrown into disarray with a switch from Argentina and Colombia to new hosts Brazil just 13 days before it was set to begin, and COVID-19 infections continuing to rise, teams may be relying on young players more than ever. Norwegian football scout Tor-Kristian Karlsen examines some of the top prospects aged 23 or under.

An exciting prospect who has excelled for Paraguay's youth teams from U-15 level upwards, he enjoyed a fine campaign with champions Libertad this season and particularly stood out in the Copa Sudamericana. An intense forward who plays the game at high speed with aggression, he's yet to find his perfect position but will probably end up as a roaming striker or a left-winger for Paraguay. Being raw and unpredictable, he's more likely to be used as an impact substitute, but has a remarkable right-footed shot in his locker.

Cristian Romero has been linked with a move to Man United. Gustavo Pagano/Getty Images

The centre-back made his Argentina debut in the World Cup qualifier against Chile on June 3 following an excellent season for Atalanta, where he usually lined up in the middle of their back three as the club finished third in Serie A. Recently linked with Manchester United, Romero's determination and highly focused defending sees him rarely hesitate when the opportunity to win the ball early arises. Robust and comfortable on the ball too, his fine early goal for Argentina against Colombia on June 8 was an example of his aerial strength.

Though well-known to MLS fans, Casseres only recently broke into contention for Venezuela and is hoping to make a similar impact for his country as his club. Agile and quick off the mark, he covers a lot of ground with effective pressing, while the dynamic central midfielder has also shown he can score from outside the box. Casseres' father, also called Cristian, represented Venezuela 28 times between 1999-2008.

While Yerry Mina and Davinson Sanchez look to be the first-choice pairing in the heart of the Colombia defence, Cuesta could make his senior debut as a backup at the Copa America. The young defender has done well in the Belgian league over the past two seasons and, although his disciplinary record can improve (he was sent off three times in the league this season), he's shown improvement in his positioning. Though his passing is still on the safe side, he's hard to beat in one vs. one situations.

Emerson has a chance to impress this summer. Ricardo Nogueira/Eurasia Sport Images/Getty Images

Signed from Atletico Mineiro in joint deal between Real Betis and Barcelona two years ago, with each club paying €6m towards his rights and Betis getting him on loan, Barcelona activated their €9m option to take him back to the Camp Nou permanently this summer.

A naturally fit and athletic defender, he's also good in the air for a full-back. Emerson is stronger defensively than Sergino Dest, but the United States international has a better attacking side to his game, so it remains to be seen if they will fight for a starting spot at Camp Nou or whether Emerson will move on to another top club (with Arsenal and Inter Milan among those to have shown an interest).

Full of energy and youthful optimism, the right-footed winger is never worried about taking on a defender. His high-risk style of football -- full of mazy dribbles, flicks and backheels -- is great fun to watch, though his trickery doesn't always come off. Ocampo was called up to the Uruguay squad on the back of a good run of form for his club and his ball-progression skills, mixed with sky-high confidence and a great long-range shot, make him a potential wildcard coming off the bench.

Tor-Kristian Karlsen is a Norwegian football scout and executive and is the former chief executive and sporting director at AS Monaco. He will write regularly for ESPN on the business of soccer and the process of scouting.

Palacios, who moved to Internacional from Chilean side Union Espanola on loan in March, is predominantly a winger but can also play centrally. The Brazilian club have already agreed to sign him permanently in 2022 and Palacios was called up to the senior Chile set-up after a fine 2020 season where he was named the second-best player in the Chilean league. In addition to an excellent shot from distance (typically a curled effort towards the far post while cutting in from the left), the pacey youngster is hard to dispossess. He often chooses the shortest route to goal when picking up the ball and will be a real danger to defenders.

The right-back often plays further up the pitch at club level and offers a lot going forward. He made his debut back in 2018 but was called up again for the recent World Cup qualifiers and played the full 90 minutes against Brazil. He has spent the last few months settling into European football following a January move to Belgium club Genk from Ecuadorian side Independiente. Pacey and always happy to join the attack, Preciado has a good positional sense and is a fine crosser of the ball.

Facundo Torres (21, AM, Uruguay and Penarol)

Another stand-out from the Uruguay youth teams, Torres was rewarded by national coach Oscar Tabarez for a fine season at Penarol with his first senior cap (came off the bench vs. Paraguay) followed by a full debut a few days later (vs. Venezuela). The left-footed attacking midfielder, who can play anywhere across the front line, is a constant threat with his incisive movement, change of pace and ability to take on defenders. He always draws a lot of fouls and is still inclined to try and go it alone too often, but his exceptional natural talent has triggered keen interest from clubs across Europe after Manchester United landed winger Facundo Pellistri from the same club in 2020.