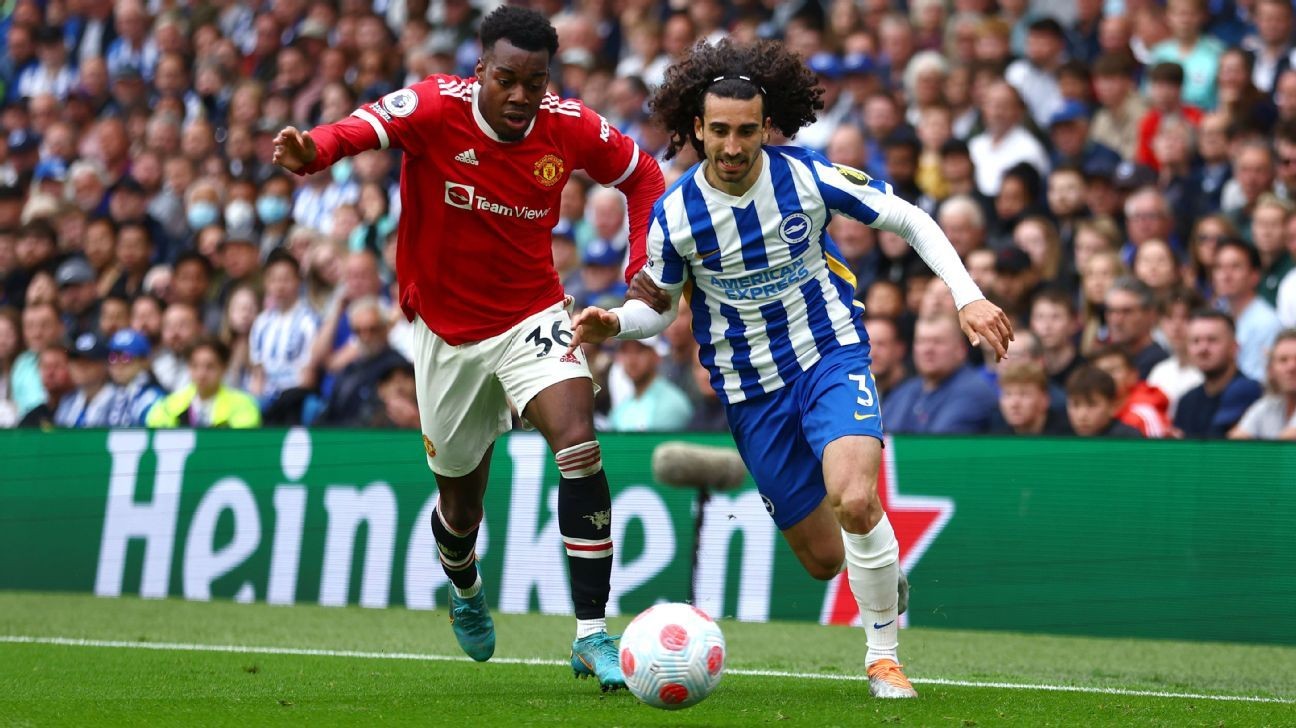 The Premier League is a tough place to play, especially for young players, but there have been a number of under-23 stars who have broken through to make a name for themselves in 2021-22.

Here's a list of 10 youngsters who, having been given opportunities in their respective first teams, have impressed.

In an otherwise miserable term at Old Trafford, the emergence of the Sweden international has been one of the few positives. Having featured little under Ole Gunnar Solskjaer in the opening half of the season, the winger/forward was given plenty of confidence by interim manager Ralf Rangnick, who's clearly seen plenty of potential in the youngster. Good on the ball, industrious and an unpredictable dribbler, Elanga is also one of the better Manchester United players when it comes to winning the ball back, and his eager pressing should be useful for new head coach Erik ten Hag.

Anthony Elanga (left) and Marc Cucurella (right) have both done well for their clubs this season. Bryn Lennon/Getty Images

As a graduate of the famous Barcelona academy, Cucurella has obvious quality on the ball and has just kept getting better and better after signing for Brighton for €18m from Getafe last summer. He is equally as comfortable at left-back as he is on the left-hand side of midfield, but he's even impressed as an overlapping centre-back -- always looking to progress with the ball and to create imbalances further up the pitch. Aggressive and attack-minded, Cucurella averages three crosses per game and has recently been linked with a move to Manchester City.

The winger has been fundamental for Everton in a dismal season and has been a key component in their fight against relegation. Slightly underappreciated for his skill on the ball and highly developed football IQ -- as few look further than his hard-working, high-intensity style -- the England under-21 international can operate down both flanks and has the technique and vision to make a difference when moving into central areas. Though he still needs to refine several areas of his game, Gordon is one of the most effective dribblers in the Premier League.

Honourable mention: Vitaliy Mykolenko, 21, LB. A £17m January arrival from Dynamo Kyiv, the Ukraine international can struggle with the defensive side of the game, but he's already shown positive flashes as a left-back or higher up the pitch.

The England U21 midfielder has built on a promising 25 games last season to become a fully fledged regular this year. Dynamic, quick and with an innate ability to arrive in the right spot in the penalty area -- he's scored six goals this campaign -- Ramsey is a first-class ball carrier (nearly six progressive carries on average per game) who is able to advance with the ball when space opens in central areas. Incisive in his movement and a fine finisher (0.15 non-penalty xG), Ramsey could land himself a senior England call-up next season.

Ryan Sessegnon has helped Tottenham in their bid to reach the Champions League next season. Vince Mignott/MB Media/Getty Images

Arguably the most unexpected success story of the season. Having completed an uneventful loan spell at Hoffenheim, the future of the former Fulham prodigy looked sure to be away from Tottenham when he returned. But, to his credit, manager Antonio Conte has given Sessegnon a new lease of life and the left wing-back has responded by being among the Italian's most productive players as they chased Champions League qualification at the end of the season. He was particularly impressive in the 3-0 win against Arsenal in the North London derby and provided a constant creative outlet in vital 1-0 home win against Burnley a few days later.

Honourable mention: Oliver Skipp, 21, DM. The defensive midfielder enjoyed a promising start to the season in which he removed any doubt as to whether he was up to Premier League standards, before suffering a pelvic injury in January that required surgery, ending his campaign.

Gallagher came through the Chelsea academy but has yet to play a senior game for them after loan spells at Charlton, Swansea, West Brom and now Crystal Palace. However, this season he has really stepped up and virtually ran the Palace midfield himself from August onwards, scoring eight goals. Perpetually on the move, always wanting to get on the ball and diligent in his defensive work, Gallagher can appear to be everywhere on the pitch. Positive in his passing and excellent at making deep runs into the box, he was rewarded with a senior England call-up in November and it would be a surprise if Chelsea didn't give him a chance next season after a tremendous debut term in the Premier League.

Johnson has been around the West Ham first team since 2018-19 but has only played backup until now. This season, helped by his versatility to play on either side of the defence or at wing-back, Johnson's chance finally came and he took it with both hands. With 33 games under his belt, he's now a regular and is developing well. Partly due to his skillset and also due to tactical considerations, Johnson has impressed more on the defensive side of the game -- one-vs.-ones, blocks and clearances -- than going forward.

Tyrick Mitchell has stood out to the extent that he made the Premier League Young Player of the Year shortlist. Visionhaus/Getty Images

Another youngster to land a recent senior England call-up, the Crystal Palace left-back can look back on an impressively consistent Premier League campaign. His eagerness to press and regain possession high up the pitch has proved more than useful for Patrick Vieira's side, while his pace makes him hard to beat in defensive duels. With 3.30 tackles per game (despite only picking up one booking all season), he's among the most proactive ball-winners in the league and was shortlisted for the Premier League's Young Player of the Year award.

Tor-Kristian Karlsen is a Norwegian football scout and executive and is the former chief executive and sporting director at AS Monaco. He will write regularly for ESPN on the business of soccer and the process of scouting.

The emergence of the Leicester midfielder would have come as no surprise to followers of the Championship, as Dewsbury-Hall enjoyed a rewarding year on loan with Luton. This season, however, the 23-year-old academy graduate has stood out. He covers a lot of ground, is active in his pressing duties and, with a fine left foot, he's able to pick out teammates in wide areas. Dewsbury-Hall is also one of the most frequent progressive passers in the league and few players are better at carrying the ball forward in counter-attacks.

Livramento's journey from playing academy football at Chelsea to becoming an immediate Premier League regular at Southampton is nothing short of spectacular. Until a recent drop in form, in which he was liable to make marking errors defensively, he had looked exceptionally lively and confident. As an attack-minded right-back, Livramento is particularly clever with his movement in the opposing half -- not just looking for the ball in wide positions, but also exploiting space to play combination passes. His ACL injury at the end of April was a blow, but hopefully he can get back to his best next year.

Honourable mention: Mohammed Salisu, 23, CB. The Ghanaian centre-back tends to deal with whatever comes his way, averaging nearly four tackles and 17 challenges per game. After joining Southampton for around €12m from Valladolid in August 2020, he had a slow start and only made his first-team debut after six months. But this season he has shown himself capable of being a regular.