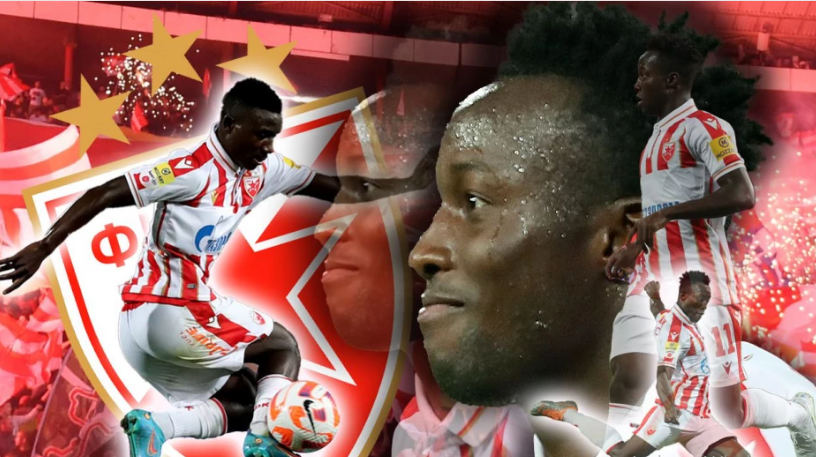 This summer, the champion of Serbia brought in a representative of Ghana, who has already become a favorite of all-star players.

Crvena zvezda made real hits on the transfer market this summer, which we recently wrote about, and probably the most resounding addition is Osman Bukari.

The fast-footed representative of Ghana arrived at "Maracana" from Ghent in a transfer worth two million euros, and already in the first five games in the red and white jersey, he announced that he will be one of Dejan Stanković's strikers.

Bukari scored as many goals and provided two assists in five matches, peaking in the first leg of the Champions League third qualifying round against Pyunik, when he scored a hat-trick, playing through Kings Kangwa for the goal.

By the way, it was only the third European hat-trick for Red Star in the 21st century.

However, in this text we will not deal with Bukari's achievements in the jersey of the Serbian champions, but with the earlier ones.

From an early age, he showed a love for sports, and his incredible speed qualified him for athletics, before his love for football took over.

"I was a runner before I decided to play football. I'm fast, when I have the ball at my feet, I have to take advantage of it," said Bukari recently.

He then embarked on the most important sideline in the world, playing for the Accra Lions by the time he turned 19. Then he went on a six-month loan to Anderlecht, for whose under-21 team he played, but the Belgian giants did not buy him back.

However, just a few days after the end of the loan, he was transferred to Slovak Trencin for 60,000 euros.

Shortly after that, he scored his debut for the new team, in the Cup match against Švošov, which he ended up scoring with two goals. It is interesting that it is also the only match in his career in which Bukari scored a total of two goals.

The Ghanaian spent two years in Slovakia during which he scored 16 goals and had 25 assists in 66 games. He played the best game against Zemplin Mihalovce in the match in which he scored a hat-trick, the only one with this Pjunik, after which his mother showed us how much the support that Osman has in Serbia means to her.

This was followed by a transfer to Ghent worth a million European notes. In his first season in Belgium, Bukari scored four goals in 35 appearances and had six assists.

At the same time, he introduced himself to Red Star fans for the first time in the Europa League matches.

The second season in which he was a player of Gent, Bukari did not spend in Belgium, but was on loan in Nantes.

There he also won the first trophy of his career, the French Cup, and in 26 games in all competitions he had two goals and four passes for a goal.

Regardless of the fact that he was more or less standard, Nantes did not decide to buy him, which was taken advantage of by Crvena zvezda, in which he showed right at the start how much the experience gathered by playing in the "league of five" means to

He has played six matches for "Crne zvezda" since March 2021, and scored his debut and so far only goal against Madagascar.

At the moment, the 170-centimeter-tall African is worth three million euros according to "Transfermarkt", and he has a contract with Red Star until 2026, so there is no doubt that the Serbian champion will one day make good money from him.