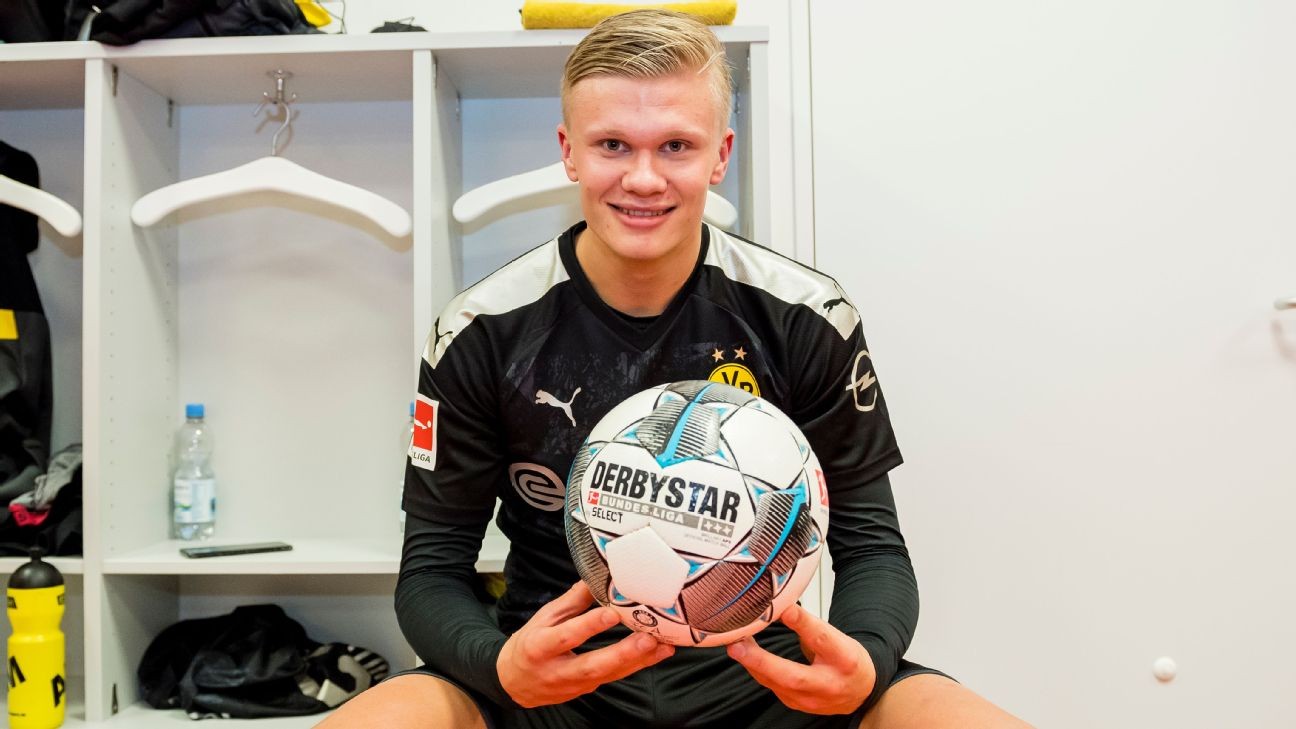 Steve Nicol weighs up whether Dortmund's Erling Haaland could have had the same immediate impact at Old Trafford.

Borussia Dortmund striker Erling Haaland scored three goals on his Bundesliga debut, but that's not enough for some people...

The Toe Poke Daily is here every day to bring you all the weirdest stories, quirkiest viral content and top trolling that the internet has to offer, all in one place.

The 19-year-old certainly has a knack for it, having bagged a hat trick on his Champions League debut in Salzburg's 6-0 win over Genk back in September that made all of Europe's biggest clubs sit up and take notice of his talents. In fact, this was the fifth time he has scored three goals in a single match this season.

However, contrary to reports in the English-speaking media, Haaland did not score a hat trick in Dortmund's 5-3 win over Augsburg -- at least not as far as football fans in Germany are concerned.

Sure, the Norway international took the league by storm, scoring three goals in his first 23 minutes in the Bundesliga. But that's the problem -- he's playing in the Bundesliga and not the Premier League. That means abiding by the rules as they are in his new country of residence, where not just any old treble of goals gets to be defined as a hat trick.

So what constitutes a "flawless" or "classic" hat trick in Germany? Well: You must score three goals, but they must be scored sequentially, and all of them must be scored in one half of the match.

Haaland scored three goals against Augsburg. He even scored them all in one half. But he was denied a "flawless" hat trick by England international Jadon Sancho. Haaland came on as a 56th-minute substitute, and Sancho set him up for his first goal just three minutes later. Before he had time to digest opening his account for his new club, Haaland was unmarked in front of goal during a Dortmund counter-attack, but this time Sancho opted to score himself rather than the pass to make it 3-3.

Soon enough, Thorgan Hazard was in a similar position, but instead of shooting teed up his new teammate for the second of his three goals. Marco Reus then set Haaland up for his third.

Despite being denied the honour of a "flawless" German hat trick on his debut, we can confirm that Haaland was still awarded a prestigious Dreierpack (triple-pack), which is much better than the Doppelpack (double-pack) his Leipzig rival Timo Werner scored at the weekend, but far from Robert Lewandowski's legendary Funferpack (five-pack) against Wolfsburg.

But don't worry, Erling - no one is going to take that match ball away from you!

Every other Liverpool player was out on their feet by this point, as Alisson sprints past them all to celebrate his assist with Salah pic.twitter.com/fF51zxfzGl

Liverpool continued on their procession to a first Premier League title in three decades with a fairly routine 2-0 win over Manchester United at Anfield on Sunday afternoon.

Goals from Virgil van Dijk and Mohamed Salah sealed the deal. Indeed, the Reds cantered to victory with such ease that even their goalkeeper, Alisson, was able to register an assist.

In setting up Salah's late clincher, Alisson became the first Liverpool goalie since Pepe Reina in 2010 to register a league assist. He then showed an impressive turn of pace to hurtle up the pitch and celebrate with his Egyptian cohort.

The 54th goalkeeper to claim a Premier League assist, Alisson now has as many assists to his name this season as Pierre-Emerick Aubameyang, Mesut Ozil, and Raheem Sterling. He has also drawn level for the season with teammates Adam Lallana and Naby Keita, and has created one more goal than Xherdan Shaqiri.

Is there anything this Liverpool team can't do?