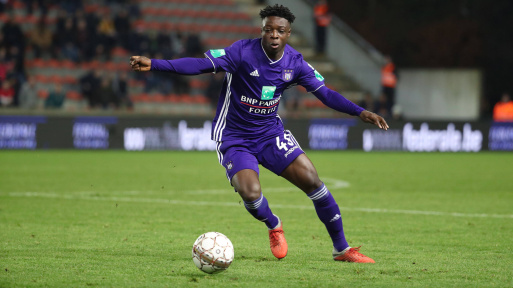 Ghanaian player and RSC Anderlecht striker Jeremy Doku turned down offers from Liverpool and other big clubs in Europe before signing for Belgium giants in 2017.

According to his father David Doku, Arsenal, Liverpool, Chelsea, Manchester City, Ajax and PSV were all interested in attracting his son at the age of fifteen.

David Doku revealed that he visited Arsenal, PSV, Ajax and Liverpool with his son Jeremy while Liverpool left the best impression on him, Jeremy opted for a professional contract with Anderlecht.

"we went to visit Arsenal, PSV, Ajax and Liverpool."Liverpool left the best impression on me." his father David told  La Dernière Heure.

"They already knew where he was going to live and which school he would go to, that was in January 2017. Steven Gerrard who is the U18 coach came to talk to us and show him his videos." he added

"Jürgen Klopp invited me to his office to explain his project with Jérémy, who saw him as the successor to Sadio Mané, which was impressive, but Jérémy had only one thought: to stay with Anderlecht and to love Anderlecht leave a day only through the big gate: with a Golden Shoe and a title."