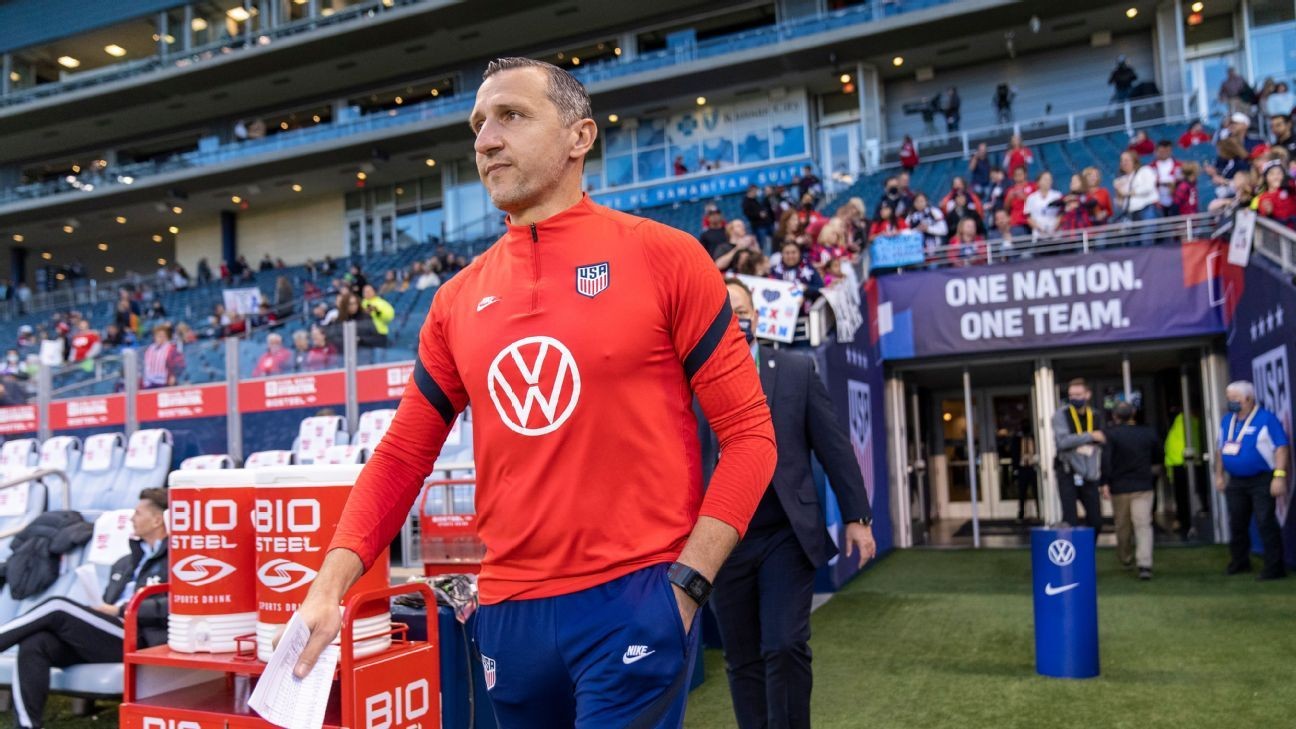 The U.S. women's national team is doing something it traditionally doesn't do very often: It's heading overseas to play a pair of friendlies against a tough opponent on hostile turf. In this case, it's Australia, a team that's been steadily on the rise thanks to the talent of players like Samantha Kerr, Caitlin Foord and Ellie Carpenter.

Fresh off a disappointing Olympics over the summer, these games -- on Friday at 11 p.m. ET and then Tuesday at 4: 05 a,m. ET (stream the second match LIVE on ESPN) won't be easy for the USWNT, but that's the whole point. The Americans want these games in Australia to be tough -- and, the players probably won't admit to this part, if they lose one or both of the games, even better. That's because losing paves the way for winning, as we have seen over and over again with the USWNT.

Consider this: Coming into the Tokyo Olympics earlier this year, head coach Vlatko Andonovski had never lost a game since taking the helm of the USWNT, and the team was riding a 44-game unbeaten streak when it arrived in Japan. That, of course, didn't work out very well.

In retrospect, is it any wonder the U.S. players looked frazzled in their opening game of the Olympics, when Sweden clobbered them in a masterful showing? The U.S. players hadn't experienced the sting of a loss in too long, and the USWNT's send-off games before the Olympics were on U.S. soil in front of packed home crowds -- something many teams in the Olympics couldn't enjoy due to the pandemic.

These games in Australia, which are open to fans, will be the USWNT's first time playing in front of away fans since the World Cup more than two years ago in France, which saw a sizable American contingent travel to see the games anyway. The USWNT's last time playing an away game against a hostile crowd outside a major tournament was in Europe in January 2019, including a 3-1 loss to France.

Lindsay Horan remembers that trip to France well, of course. When asked by ESPN about what's different when playing in front of away fans, she can't help but mention that loss. "It's different -- you're going into the game and it's more difficult to ever play in an away stadium," Horan said. "I think the last time I remember doing it was in France before the World Cup and it's difficult when they have a 12th man."

Jill Ellis, the former U.S. coach, has directly credited losing with enabling the USWNT to overcome a slow start in Canada and win the 2015 World Cup. The Americans went to Brazil in December 2014 and lost, and then to France in February 2015 and lost again. "I wanted them to struggle," Ellis said of their trip to Brazil in an exclusive interview. "It was going to be a challenge. It was hot, adverse and hard, and we lost the game. From there, I took them to France and we struggled, we lost."

"In those hardships, we learned more about ourselves," she added. "I'm going to say that without those struggles and losses, I don't think we win the World Cup."

Vlatko Andonovski and the U.S. women are thinking smart to go away for a tough pair of friendlies. Brad Smith/ISI Photos/Getty Images

Andonovski could only do so much before the Tokyo Olympics due to the COVID-19 pandemic -- he had been on the job mere months before sports and travel practically shut down. But now he is hoping to expand the USWNT's horizons, especially as he brings more youngsters into the fold. His squad in Australia includes 12 players with 10 caps or less, including five uncapped players.

"It is important that we travel outside of the country and we experience a bit of adversity and experience an environment where the opponents have that support," Andonovski said. "It's important not just to experience it, but to be in a venue or in the country that will be hosts for the next big event, the World Cup in 2023. So, hopefully in the future we'll be able to do it more often than we were in the last 18 months or so. It's important especially for players that have never experienced something like that before."

Although losing may be the best thing for the USWNT in the long run, fans have never tolerated it very well. In 2017, when the USWNT suffered back-to-back losses at home for the first time in 17 years, some fans reacted by calling for Ellis to be fired, using the hashtag #FireJillEllis in case it wasn't clear enough. Nevermind that Ellis had won a World Cup for the U.S. only two years prior: USWNT fans are accustomed to winning, especially at home.

"Everyone's just so used to winning everything and, I think if we want to win the World Cup, things like this need to happen," Allie Long told me at the time. "I love that the fans are mad. It shows so much passion."

Her words, of course, eventually rang true. The USWNT, including Long, stormed their way through France in 2019 and became the first team to ever win back-to-back Women's World Cups. Ellis had repeated the same formula she credited for winning the World Cup four years earlier: five months ahead of the 2019 World Cup, she took the USWNT to Europe for friendlies and they lost -- a positive omen, it turned out, and it's easy to see why the losses help.

If losing must be an option to make a road trip worth it, then Australia is as good an opponent as any. The Matildas, as they are known, have already been on the rise due to an emergence of raw talent led by Samantha Kerr, who has at times over the past several years been widely considered the best striker on the planet. She has an emerging cast of talent that Australian coach Tony Gustavsson is transforming from a direct counterattacking team into a possession-based, high-pressing collective. It's still coming together, but there are signs of progress.

USWNT coach Vlatko Andonovski explains the selection of forwards like Midge Purce, Ashley Hatch and Sophia Smith for the friendlies in Australia.

Although soccer is a cruel game where the better side can still lose, nothing can force reassessment or spark a fire under a team like losing. But just playing in a different environment than the party atmosphere of U.S. home games will be good for a U.S. side that looked far too complacent through the Olympics in Japan.

This trip to Australia is also notable in that it's the USWNT's first in 21 years. They visited Australia on three separate trips in 2000, including one that was part of a pivotal boycott against U.S. Soccer, and the final one for the Sydney Olympics. There's no doubt that the Women's World Cup in 2023, which is set to be hosted in Australia and New Zealand, is the reason behind the journey, but getting out of the U.S. may be the most important factor at the moment. Going back to the beginning of 2016, just 10 of the USWNT's 84 non-World Cup and non-Olympics matches have been played outside of the United States. The rest have been played at home.

Playing abroad is not the be-all and end-all, of course. The U.S. used to go to Portugal annually for an invitational called the Algarve Cup, but it was a setting that provided little atmosphere and often under-powered opponents. The U.S. Soccer Federation decided to start its own tournament at the same time every year called The SheBelieves Cup. Unlike the Algarve Cup, the games are played in three different cities in a competition format identical to the World Cup.

The SheBelieves Cup has turned into a more valuable test-run for the real thing, even if the games are played stateside. But there's no replicating a trip down under, in front of Australian fans eager for some revenge after the USWNT's beat the Matildas in the bronze medal match of the Tokyo Olympics.

The Australia federation has said it has sold more than 35,000 tickets for Tuesday's game in Sydney, which would set a new record as the largest crowd to watch the Matildas in Australia. Horan knows that means a lot of Aussies rooting against the Americans -- but she loves that, she said. "I think it's this cool feeling when you're able to score on them or do something well and shut up their fans," she said, smirking.

But then again, if the Matildas have a good showing, that wouldn't be so bad in the long run either.