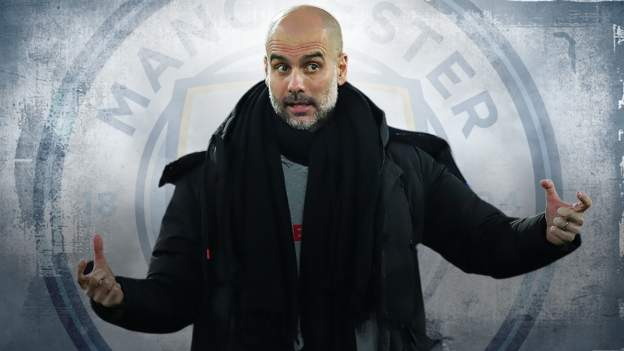 In the past, when Manchester City have reached the knockout stages of the Champions League, at the back of my mind I've always been wondering what is going to go wrong this time?

Not any more. The mentality Pep Guardiola's side are showing at the moment is one of the reasons I think this year might be different, and their style of play this season is another.

In recent years, City have gone out of the Champions League to teams they really should have beaten: Monaco, Tottenham and, last summer, Lyon.

Guardiola used an unfamiliar 3-1-4-2 formation against Lyon in last season's Champions League quarter-final. After City's shock 3-1 defeat in August, he explained it was because he did not want to leave his defenders in two-on-two situations with Lyon's fast forwards, Memphis Depay and Karl Toko Ekambi

On top of some silly errors, they have sometimes paid the price for changing from the way they have been playing in the Premier League, with Pep accused of over-thinking things to deal with the opposition's own threat.

There have been times that kind of tactical tweak has worked of course, such as City's statement win over Real Madrid at the Bernabeu at this stage of the competition 12 months ago.

A fully-fit Sergio Aguero was left on the bench as City played without a recognised striker in their 2-1 win over Real Madrid last February as Guardiola went for legs and energy in a high-intensity approach. Injury and illness have seen Aguero miss most of this season and City have regularly played with a false nine, but instead of pressing they have focused on keeping the ball

This time, though, the formation they have been using during their relentless 18-game winning run means they have been controlling games and look so solid at the back. There really is no need to change anything now.

Instead, I just want to see City take the same swagger and confidence we see from them every week into their performances in Europe, starting against Borussia Monchengladbach in Wednesday's first leg of their last-16 tie.

Is this City's year to win it for the first time? It can be. To be honest, I look at the German side and the other teams left in the competition, and where they are all at, and I don't see anything to be scared of - quite the opposite in fact.

Rather than City fearing other teams and individual players - which might have been the case before - this year everyone else in Europe is going to be afraid of facing them.

Quadruple chance - can City win them all?

City's return to the Champions League comes with them sitting 10 points clear at the top of the Premier League, into the FA Cup quarter-finals, where they face Everton, and a date set with Tottenham in the Carabao Cup final on 25 April.

People are already talking about the Quadruple and asking me 'can they win them all?'

For me, though, it's still a bit early to be getting excited about a clean sweep like that.

Since taking charge at City in 2016, Guardiola has won two Premier League titles, one FA Cup and three League Cups. He won the domestic Treble in 2019

We already know Pep is a serial winner from the trophies he has collected in his time at City and elsewhere but, being realistic, it is going to be extremely tough to take all four, not just because of the opposition in their way, but because their schedule will be so demanding in the next three months if they keep chasing glory on every front.

On the plus side, with midfielder Kevin de Bruyne and striker Sergio Aguero both back in the squad and on their way to full fitness, defender Nathan Ake is their only player out injured.

City's strength in depth is going to be a key factor in how much they win, but Pep seems to be handling that side of things extremely well already - everyone seems happy when they come in and out of the team, and the really encouraging thing is that whoever does play seems to be at the top of their game.

Pep made five changes for their 1-0 win over Arsenal on Sunday, no doubt with Wednesday's game in Budapest in mind, but it didn't knock City out of their stride.

He has already adapted the way City play, because they used to be a high-pressing team with everyone doing a lot of running, at a high tempo.

You can't do that this season because it would burn the players out so, instead of constantly trying to carve chances out, it is a case of 'let's starve the opposition of the ball'.

It is working. City don't try to keep landing knockout blows, but they are just jabbing away at you constantly - until you are too exhausted to hit back.

There is just no let-up and, while this City team does not tear the opposition apart like some of Pep's earlier Etihad Stadium sides did, they are far more consistent.

They don't look tired yet either, even with the number of games they have played in recent weeks, and hopefully that can continue. It could make a big difference, especially in Europe.

I have often felt in the past that the likes of Bayern Munich or Paris St-Germain had a bit of an advantage in the knockout rounds of the Champions League, because usually by this stage of the season they are dead certs to win their domestic league - it means they can do some tinkering in their league games and rest people.

City are in that situation themselves now, with a decent cushion domestically, and hopefully they can really benefit from that.