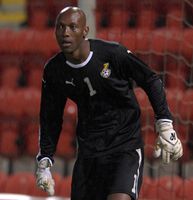 William Amamoo currently head of goalkeepers department for Gefle in Sweden has revealed that Black Stars technical handlers sidelining him led to his retirement from international football.

“I didn’t return to the Black Stars goalposts after Ghana lost to Japan in a friendly game on  the 9th of September, 2009,”

“I was much disappointed in the then National team handlers for how they handled certain  issues in the team,"

“Ghana have not got many goalkeepers,"

Amamoo received his first cap for the Blacks Stars at the friendly match against Australia on 23 May 2008.