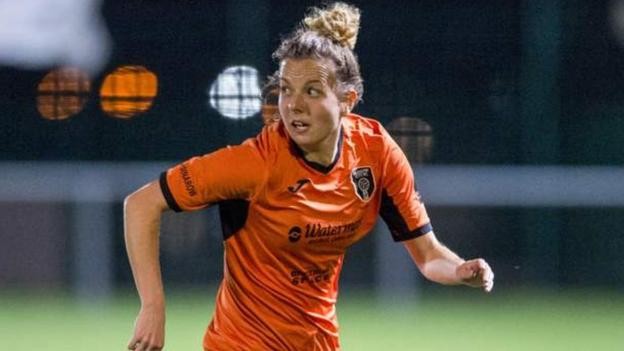 Glasgow City turned in one of their finest performances in Europe to take a first-leg lead against Cypriots Somatio Barcelona in the first 32 of the Women's Champions League.

It is their first ever win away from home in the knockout stages.

Hayley Lauder gave them the perfect start after three minutes, and Somatio's Rita Akaffou was then sent off after two first-half yellow cards.

Abbi Grant and Kirsty Howat both thumped the woodwork as City dominated despite the baking heat, while Howat also had a goal harshly ruled out.

They face the second leg at Petershill Park on 27 September clear favourites now to progress to the last 16 for the first time since 2014.

Scott Booth's side are not a team used to losing. They have a 100% record domestically this season outside of games against Hibernian.

So defeats linger longer than others. And last year's knockout exit to Kazygurt of Ukraine has not been forgotten. A 3-0 defeat away from home was overturned in Glasgow, but they went out on away goals.

Three minutes in and they did what they did not do away from home 12 months ago - they scored. Grant met a corner at the edge of the box, drove it towards the back post where Lauder stuck a foot out to turn it in.

They mostly had to defend but they did it well, and still created the better chances. Howat converted a Ross cross but was flagged offside. Grant then cracked a shot off the bar.

Once home captain Akaffou was sent off the onus went to the visitors. Howat hit the post as a host of chances were created.

Even after Ross was sent off in bizarre fashion - picking up a second booking for taking a free-kick too quickly - City still dominated. Nicola Docherty's free-kick was tipped over before Howat rounded the goalkeeper but could not get enough purchase on her effort.

Glasgow's reward arrived when Crichton peeled off her marker and buried Docherty's cross into the top corner.

Somatio Barcelona, only three years old, have quickly established themselves as the top side in Cyprus.

The early goal was a huge blow but they recovered with spells of dominance in the first half. At times they had a front three - Ivory Coast international Rebecca Elloh in particular hard to pin down because of her electric pace.

But then skipper Akaffou, already on a yellow card, needlessly knocked over Howat before raising her hands to Grant, leaving her side a player short before the half-time whistle.

They had quality in their side, but not the discipline. They let frustration get the better of them, giving away needless free-kicks. Krystyna Freda cracked the crossbar with a shot but even then it was a lack of patience up front from the hosts.

The 2-0 deficit leaves them with it all to do in Glasgow against a City team so used to winning.