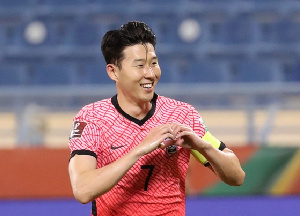 Ahead of the South Korea duel, the Leicester City defender says the Black Stars has a plan to stop Son Heung Min.

“I know Son Heung-min. We play in the English Premier League and we have a strategy to stop him.” Daniel Amartey told media ahead of South Korea clash.

Meanwhile, Ghana risk of missing out in the knockout stages should they suffer a defeat against South Korea.