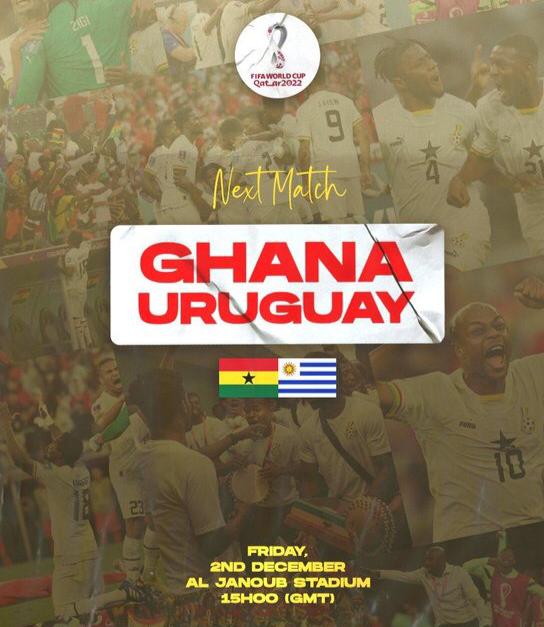 The day is finally here for Ghana to try and get one over Uruguay for the heartbreak from the 2010 FIFA World Cup.

On Friday afternoon, the Black Stars will take on their Uruguayan counterparts in a final Group H encounter of ongoing mundial in Qatar.

When this fixture was confirmed months ago at the end of the draw for the world cup, just one thing resonated among Ghanaians and that is revenge.

The entire country agrees that Uruguay striker Luis Suarez’s use of his hand to deny Ghana a goal in the 2010 encounter robbed the country and the rest of the continent of a historic moment that would have brought joy to Africa.

After several months of waiting, Ghana and Uruguay are finally set to meet again.

In what will be a Group H showdown, the Black Stars are in a better place than the opponent.

From the two matches played in the group so far, Ghana has one win and one defeat.

That has given the Black Stars three important points and an even goal difference. With only Portugal having more points [6] than Ghana in the group, there is no pressure on the Black Stars ahead of the game.

For Uruguay, it is simple but complex at the same time. The South Americans need to simply beat Ghana to advance to the Round 16 stage of the 2022 FIFA World Cup.

What makes it complex is the fact that they come up against a country with so much to play for. Besides aiming for the win to book a place in the Round stage, players are motivated to stop Uruguay from winning to bring joy to Ghanaians and the rest of Africa.

In the history of the two countries, they have faced each other just once. It was in 2010 when Ghana lost to Uruguay on penalties after that nerve-racking contest.

But for Suarez’s decision to use his hand to deny Ghana a goal and Asamoah Gyan’s inability to convert a penalty kick, the Black Stars would have set a record to become the first African side to reach the semi-finals of a World Cup tournament.

The Group H match between Ghana and Uruguay is scheduled to kick off at 3pm on Friday.