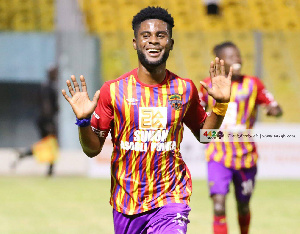 Barnieh, who been instrumental for the Phobians was included in the 26-man squad for the mundial released on Monday and will compete in his first World Cup with the Black Stars.

The Black Meteors captain was among the two-home based players to have made Coach Otto Addo's final 26-man squad for the tournament.

Afriyie-Barnieh was with his teammates and coach when the squad was announced on Monday, November 14.

According to Inkoom, Barnieh’s inclusion in the Black Stars did not come as a surprise to him due to his outstanding performance for Hearts of Oak.

“I’m happy for him because you can see that he is doing very well and I’m surprised that he is in the squad. I think when you are doing a good job, you deserve to be honoured. In my opinion I am very happy for him but the most important thing is that he has to believe in himself, he has go there and show that he can do it and I believe he can do it”

“He has a lot of potential but what he has to do is to stay focus, work hard and I think that the sky will be his limit” he said.

Ghana will open their campaign against Portugal on November 24 at Stadium 974 in Doha.