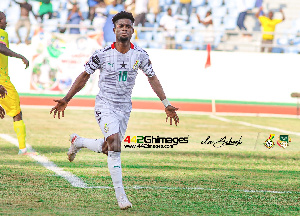 Barnieh, who been instrumental for the Phobians was included in the 26-man squad for the mundial released on Monday and will compete in his first World Cup with the Black Stars.

The Black Meteors captain was among the two-home based players to have made Coach Otto Addo's final 26-man squad for the tournament.

Afriyie-Barnieh was with his teammates and coach when the squad was announced and according to him, his inclusion in the final squad lists for the tournament is a dream come true.

“I am very happy because it’s a big platform and the biggest stage for every player on this earth  dream to be part of a team to participate in the World Cup. so I’m feeling very great and happy for this call up” he said.

Ghana will open their campaign against Portugal on November 24 at Stadium 974 in Doha.