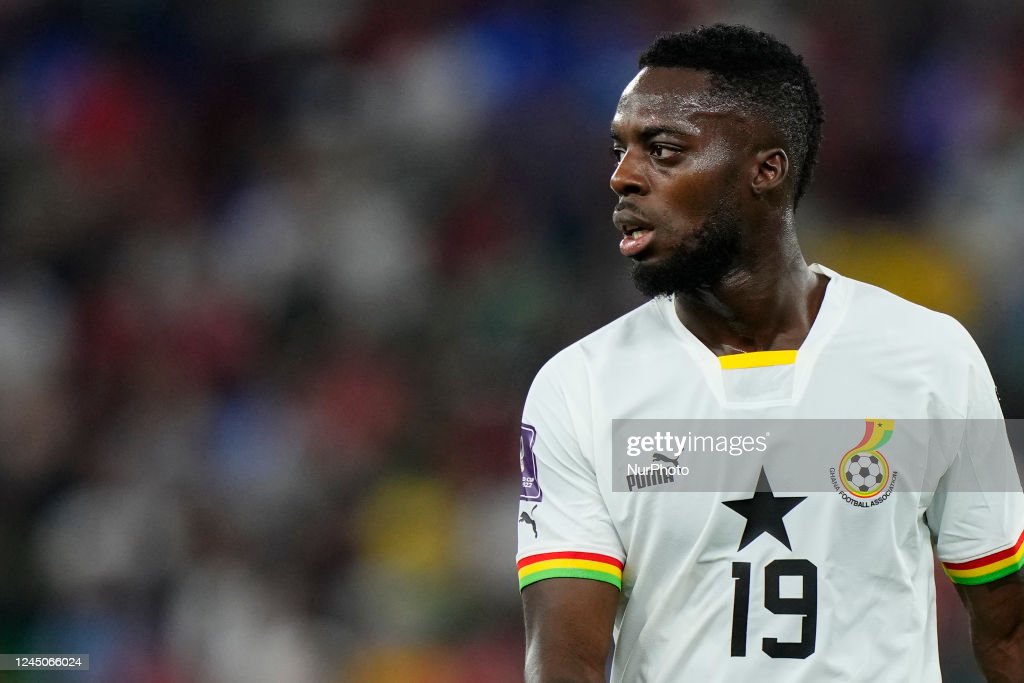 Iñaki Williams Centre-Forward of Ghana and Athletic Bilbao during the FIFA World Cup Qatar 2022 Group H match between Portugal and Ghana at Stadium 974 on November 24, 2022 in Doha, Qatar. (Photo by Jose Breton/Pics Action/NurPhoto via Getty Images)

Ghana striker has stated that playing in the 2022 World Cup which is been held in Qatar is a dream for him. Inaki Williams is the player with the most consecutive appearances for his club Bilbao.

Inaki Williams has made over 350 first-team appearances for the club, including a La Liga record of over 230 consecutive games. He scored the winning goal of the 2020–21 Supercopa de Espana.

In an interview, the striker spoke about facing his brother who plays for Spain with Ghana, his ability to communicate in English, and playing in a big tournament like the World Cup.

On playing with Spain Inaki said he had to take another path.

"I have always worked to the fullest with Athletic to be [with the Spanish team], but I have had to take another path"

He admitted that he wasn't sure how Ghanaian supporters will receive him since he hasn't stayed in Ghana.

“It was now or never. It was not easy to get out of the comfort zone, travel, play in Africa and do it for my family's country. I was afraid of how the fans would receive me having never lived there. I didn't know if they would understand and see me as just another player. But people are very proud of my decision, they know where my origins are, the ones my parents instilled in me. And today I have to represent them. I hope they have the same admiration for me as in Bilbao,"

Inaki Williams revealed his grandfather was very happy to see him play at the World Cup.

“The World Cup was important, but it didn't have much influence. Even having already qualified, he was not clear. My grandfather told me that if he had that chance, he should take advantage of it. I knew it wasn't easy because it involved a lot of changes, but he has never asked me for anything, and that I should do it at the age of 90 and living there... That has been one of the biggest reasons, his enthusiasm to see me play a World Cup with Ghana,"

On his stay in Ghana, he said it was also an adventure and an opportunity to play football with his cousins.

“At first, because of the money, it was not easy for everyone to go, although now, that the years have gone well and I have managed to be a First Division footballer, I have been able to enjoy my family, my grandparents and my cousins. This summer I took my girlfriend and her sister. The first time I was four or five years old, and I do remember playing in the mud, on the ground and barefoot, with my cousins. It was one of my best summers. Soccer at all hours. I even went to school because we spent four months there. Then there was a break of six or seven years, until we flew to my maternal grandmother's funeral,"

Inaki compared life in Spain to Ghana and said he doesn't understand why people have basic things in Bilbao but they are not happy.

“In Spain, compared to the people around me, I was the one with the least chance. But then he would go to Ghana and he was the one who lived the best. Something weird. Because basic things that you have in Bilbao, the majority there do not enjoy. You ask yourself why you have this life and others don't. These are questions for which I have not found the answer,"

On speaking English and facing his brother Nico who plays for Spain with the Black Stars Inaki said its football and they will experience it separately.

“At home they have always spoken to us in that language, so the adaptation has been easier. I understand it perfectly. What is a little difficult for me is speaking it, although the coach addresses us in English. This is serving me as a master's degree in English,"

“Hopefully I can get past the group stage and meet in the quarterfinals. We talk a lot. This is a new situation and we have to experience it separately. But it's football, there's nothing out of the ordinary to what we do every day in Bilbao. They are going to talk about the Williams brothers,”

He also stated that he is happy to represent a lot of people that is the Basque culture and the Ghanaian culture.

“ Everything happens for a reason. I was born in Bilbao and I can play for Athletic. The culture in which I have grown up is Basque. My friends, at school... When I come home, my parents brought me up in the Ghanaian culture. I have the Basque culture and the blood and culture of Ghana. I have two nationalities and I am very happy to be able to represent a lot of people and make them happy,"

On support from the people in Bilbao he said they have a divided heart some support Ghana and others support Spain because of his brother Nico.

“There are people in Bilbao who support Ghana in the World Cup. But they also go with Nico. People have a divided heart and support us both,"