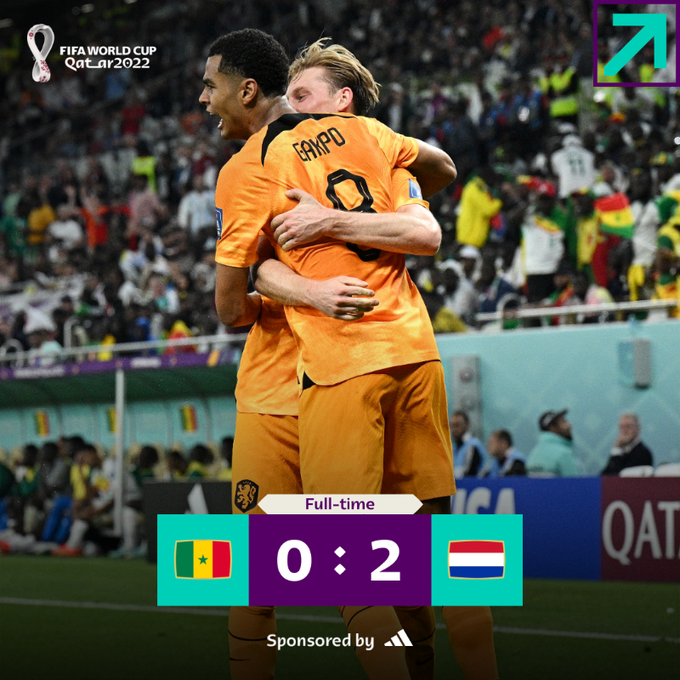 A Senegal without talisman Sadio Mane played some impressive football on Monday evening but unfortunately suffered a late heartbreak.

The Teranga Lions today locked horns with the Dutch national team in the second Group A encounter of the 2022 FIFA World Cup in Qatar.

Throughout the first half, both national teams entertained fans in the stands with some delightful end-to-end football action.

The Netherlands perhaps had the best opportunity to score in the first half when Frenkie de Jong failed to capitalise on a one-on-one situation by trying to go past the retreating defenders.

With all to play for in the second half, Senegal opened up more and caused a lot of trouble for the defense of the opponent.

Unfortunately, the many forward advances never resulted in a goal.

In the 84th minute, the Netherlands finally broke the deadlock of the game when Senegal goalkeeper Eduard Mendy came out for the ball too late.

Before he could reach the ball, Cody Gakpo had already headed the ball and found the back of the net with his effort to give the Netherlands the lead.

Late in stoppage time, substitute Davy Klaasen capitalised on another mistake from Mendy to give the Dutch national team a 2-0 goal lead.

Eventually, the Netherlands bagged the maximum three points thanks to the 2-0 win.

Up next for Senegal, they will take on Qatar on Friday in the second Group A game.

The host nation lost the opening game of the tournament to Ecuador on Sunday night.