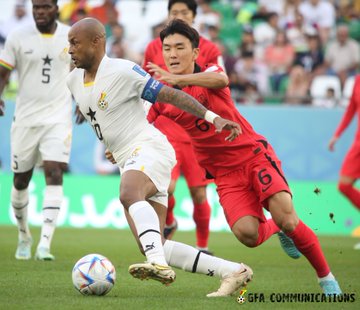 Ghana's second group game against South Korea has placed fourth in the most entertaining game rankings at the ongoing 2022 World Cup by American media.

Ghana's game 3-2 against South Korea placed fourth and the game was described as "crazy".

In the second group game, Ghana had to battle very hard to grab the three points.

Ghana was the first to score through Southampton defender Mohammed Salisu in the 24th minute after a corner by Jordan Ayew. The goal was checked by VAR and the referee whistled for a goal.

Ghana scored again in the 34th minute through Ajax midfielder Mohammed Kudus after receiving a wonderful ball from Jordan Ayew.

After halftime, the South Koreans made a couple of changes and started putting pressure on Ghana. The pressure paid off and Gue-sung Cho scored from a pass from Kang-in Lee. They scored a few minutes later through Gue-sung Cho again.

Ghana's third goal was scored by Mohammed Kudus his second of the game. His goal was assisted by Inaki Williams.