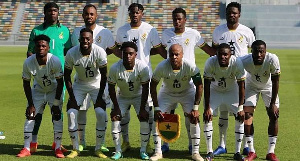 Ghana forward Inaki Williams has reacted to the Black Stars defeat to Portugal in the 2022 World Cup on Thursday.

In a post sighted by Footballghana.com, the Athletic Bilbao forward expressed no regrets in the Portugal defeat, saying there are two games left to make Ghanaians proud.

“There is no time for regrets, there are 2 games left still, thank you fans for the unconditional support” he tweeted.