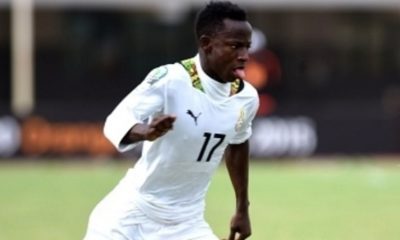 Captain for the Ghana U-23 team, Yaw Yeboah has thanked the technical team of the Black Stars for giving him the opportunity to spend time with the team despite missing out on the final squad for this year’s Africa Cup of Nations (AFCON) tournament.

The player’s impressive campaign with his CD Numancia side and the Ghana u-23 team earned him a call-up into the provisional 29-man squad. Having spent a week with the team, he has been axed from the final team and will not be making it to Egypt for the continental showdown.

In an interview with Journalist following the unveiling of the final squad, Yaw Yeboah expressed his appreciation to everybody he worked with at the Black Stars camp.

“This is part of life and it is part of football. I want to thank everybody, the management, the nation for giving me the opportunity to be here”.

“It is not easy to be part of the national team squad. I mean playing under this wonderful players, Asamoah Gyan, Ayew, Wakaso, Atsu, all these big players that have big names in Africa, in Ghana, I mean for me it's a pleasure to play with them and learn a lot”.

“Playing under a wonderful coach like Kwesi Appiah, former player like Tanko and all these management with big names in Africa and Ghana. Being part of them makes me special because it makes me feel like I'm being under good people.

“And sometimes being under good people, thing go well for you but I just want to wish my colleagues all the best in this tournament. Our prayers are with them”, the youth star explained.

He will be part of the Ghana u-23 team that will play a double header against Algeria for the final qualifying round ahead of the u-23 AFCON.