The Ghana Football Association (GFA) has in a letter to Asante Kotoko noted that the grievances of the club with regards to the recording of their matches in the Premier League will be discussed next week.

The Porcupine Warriors club and the country’s football governing body in the past few days have been in loggerheads after the latter stopped the former from filming their game against Techiman Eleven Wonders last Sunday.

Today, Asante Kotoko in a letter has described the GFA's decision not to allow clubs to film their matches for education purposes as arbitrary and against the provisions of the Ghana Premier League Regulations (2019).

Subsequently this evening, the GFA has acknowledged the letter from the Kumasi-based club. In the letter available with footballghana.com, the Ghana FA says issues raised by the club will be discussed next week.

“It is with greatest humility that the Ghana Football Association (GFA) write to acknowledge receipt of your letter dated today, November 19, 2020.

“The subject matter of your letter is part of key issues to be discussed at the Meeting scheduled by the GFA with all the Chief Executive officers of the Premier League clubs on Monday, November 23, 2020, at 2pm,” the letter from the GFA reads.

Below is a copy of the letter. 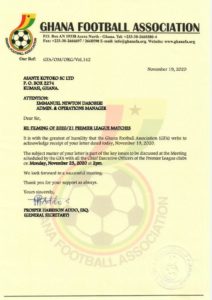