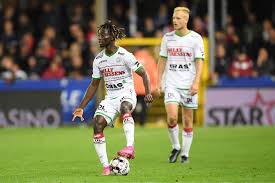 Zulte Waregem defender Gideon Mensah has been handed a late call-up to the Black Stars for the 2019 Africa Cup of Nations qualifiers against South Africa and  Sao Tome and Principe.

The former WAFA SC left-back has been handed the invitation by coach Kwesi Appiah following the absence of Mubarak Wakaso and Harrison Afful.

The Black Stars will face South Africa on November 14 before travelling Sao Tome and Principe to play them four days later.

The 21-year-old is currently one of the best young left-backs in Europe following his exploits at Zulte Waregem this season.

He joined the Belgian club on a season-long deal from Red Bull Salzburg in the summer.

Mensah has made seven appearances and provided for Zulte Waregem in all competitions so far this season.