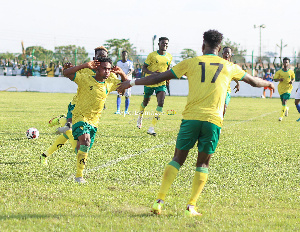 Bibiani Goldstars will take on Bechem United at Duns Park on Sunday as they look to return to winning ways to revive their campaign.

The miners, who are in their second season of the Ghana Premier League are without a win after two matches into the 2022/23 league season.

They suffered a 1-0 defeat to both Dreams FC and Nsoatreman FC in their first two Ghana Premier League games respectively.

Goldstars after two defeats will be looking forward to their first win when they face Bechem United in matchday 3 of the Ghana Premier League.

Meanwhile, Bechem United who finished 3rd last season goes into the much-anticipating game with fresh energy after getting enough rest. The Hunters play no part in matchday 2 due Asante Kotoko’s African campaign.

Having suffered defeat in their season opener against Great Olympics at the Accra Sports Stadium, Kasim Mingle and his outfit will hope to record their first win of the season in the domestic top-flight.