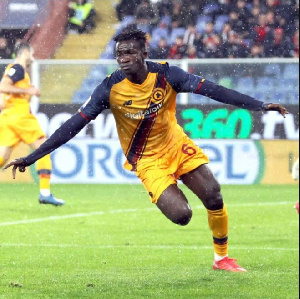 The 18-year-old joined AS Roma early this year and featured for the U-19 side where he impressed and earned himself a spot in the senior team under Jose Mourinho.

He has made three appearances in the Serie A scoring two goals in the process.

Afena Gyan dominated the headlines after climbing off the bench to hit a brace against Genoa.

In an interview with Angel TV, the FIFA agent indicated his client attracted interest from Italian giants but could not seal a move to the seven-time Champions League winners.

“When am taking a player abroad, I look at the clubs on mid and low table because I know we don’t have the basis. I offered Afena Gyan to Roma and after one week of training they were impressed and decided to sign him”

“He stayed in Roma for two weeks and then I recall him back. While negotiating with Roma, I took him to AC Milan to test the waters and see, and at Milan too they were very interested to sign him but at that time they were concentrating on the league because they wanted to win the league last year, so a deal was not sealed” he added.