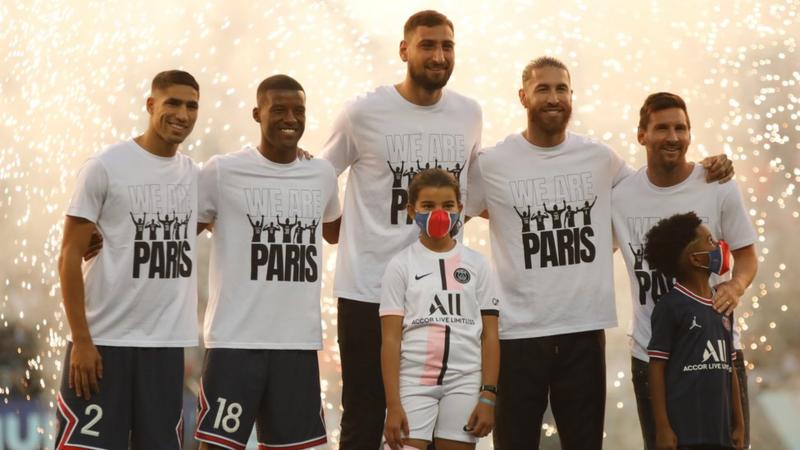 The likes of Cristiano Ronaldo and Lionel Messi may have stolen the headlines in one of the most memorable transfer windows, but there were also moves aplenty for African footballers. 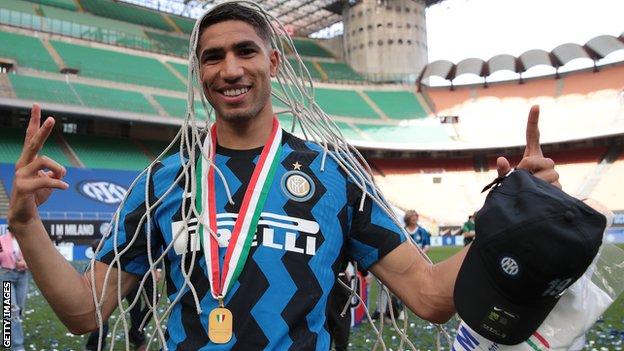 In France, Moroccan full-back Achraf Hakimi proved the most expensive African of the window.

Paris Saint-Germain may have wanted Messi, but they also wanted Hakimi who cost around $70m from Inter Milan, for whom he played a pivotal role in Inter's first title in 11 years.

With financial uncertainty engulfing the Italians, PSG moved swiftly to secure the services of the former Real Madrid player - who scored on his league debut against Troyes.

Six years after leaving France for Italian giants Juventus, Gabon midfielder Mario Lemina returned when joining Nice from Southampton, for whom he played 52 times in the Premier League. 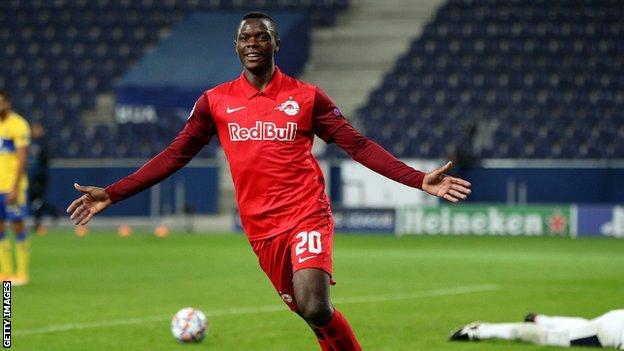 Long touted as one of football's future stars, Zambia's Patson Daka finally got the big money move his eye-catching performances for Austrian side RB Salzburg over the last two years have earned.

Daka joined Premier League side Leicester City for $30m, a record transfer fee for a Zambian.

Brighton and Hove Albion were also on the hunt for a Zambian, reportedly paying some $26m to bring in midfielder Enock Mwepu - a close friend of Daka - from RB Salzburg.

Nicknamed 'Computer', Mwepu, 23, arrives to bolster the Seagulls' numbers in the middle but he can also play across midfield - either out wide (as he did on occasion for Salzburg), deep in midfield or closer to the forward line.

A winger by trade, the 24-year-old's versatility appealed to Bees coach Thomas Frank, who secured him on a four-year deal.

Already capped by Senegal, the 18-year-old will remain with the French Ligue 1 club on loan for the rest of the season.

Midfielder Oghenekaro Etebo joined Watford on a season-long loan from Stoke City, who have loaned out the 25-year-old Nigerian three times since he joined in 2018.

The Hornets also added firepower with the signing of Etebo's compatriot Emmanuel Dennis from Belgian side Club Brugge on a five-year deal. 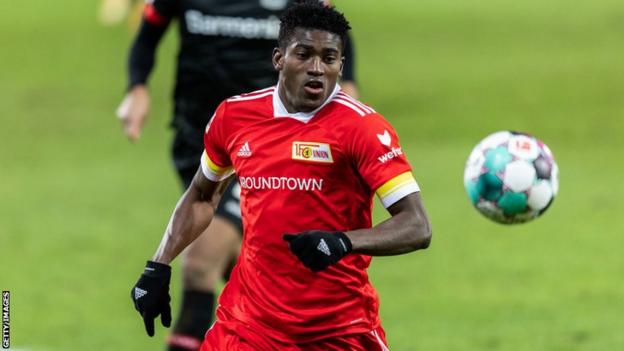 Nigerian Taiwo Awoniyi, 24, left Liverpool to join German side Union Berlin, where he already has six goals, on a five-year deal.

He scored five goals in 22 games on loan at the Bundesliga club last season and Liverpool have negotiated a 10% sell-on clause in his deal.

Awoniyi, who joined Liverpool in August 2015, never featured for the club and was only granted a work permit to play in the UK in May.

Talented Ivorian defender Odilon Kossounou is already making a strong impression with Bayer Leverkusen, having joined from Club Brugge for just over $27m.

It will come as no surprise, as the German club paid the highest fee ever received by a Jupiler League club in order to snap up the 20-year-old.

Kossounou, who made his international debut for the Ivory Coast in late 2020, "has everything to be able to play an important role in our team in the future" according to Leverkusen sporting director Simon Rolfes. 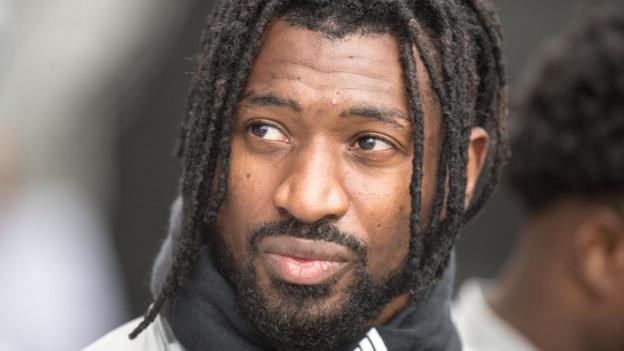 Andre Zambo Anguissa moved from the English Championship to Serie A

Andre Zambo Anguissa joins Napoli on loan from English Championship side Fulham to boost his chances of making the Cameroon squad for next year's African Cup of Nations on home soil.

Obi, 30, signed a one-year deal as a free agent, while Africa's top scorer in Serie A last season with 20 goals, Simy, joins on loan from relegated Crotone with the option of a permanent deal.

Another promoted side, Venezia, also snapped up Nigerian duo of Tyronne Ebuehi (Benfica) and David Okereke (Club Brugge) on loan. 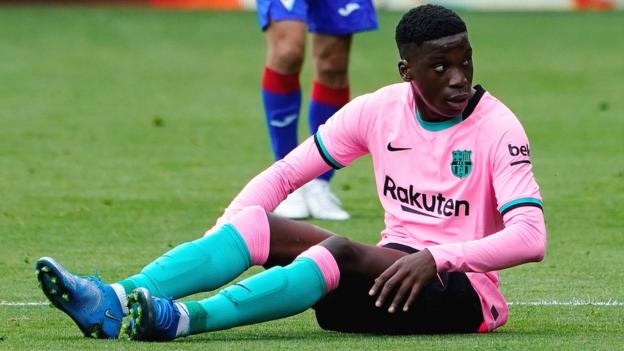 The end of the transfer window provided a resolution for one of the summer's more protracted storylines, as 18-year-old Ilaix Moriba ended his association with Spanish giants Barcelona.

German side RB Leipzig won the race to sign the highly-coveted Guinean midfielder, who had fallen out of favour at Camp Nou after he stalled on signing a new contract.

"There aren't many players his age that bring that much talent to the table at a top-level," Leipzig Technical Director Christopher Vivell said in a club statement.

Elsewhere, Algeria international Aissa Mandi, 29, signed a four-year deal with Villarreal on a free transfer following the end of his contract at Real Betis. 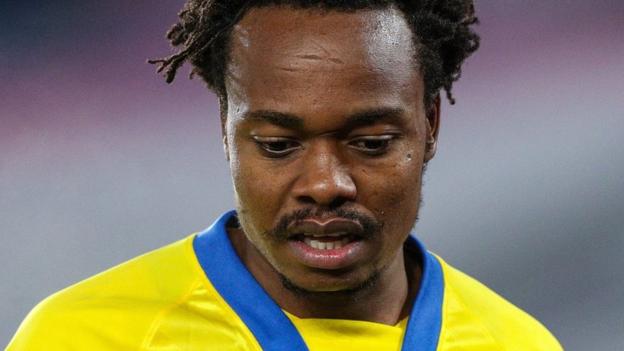 The 27-year-old joined Brighton in 2018 and had successful loan spells with three Belgian clubs - Royale Union Saint-Gilloise, Club Brugge and Anderlecht - before returning to the Albion in January.

He made just six appearances for Albion, making his debut in the FA Cup tie against Newport County in January.

"I have really enjoyed working with Percy," Brighton boss Graham Potter told the club website. "He is very professional and extremely popular, but at this stage of his career he wants to be playing regularly and we understand that. On behalf of everyone at the club, I wish him well for the future."

Since joining the Super Lig side from Aston Villa, the first Tanzanian to play in the Premier League has flattered to deceive - managing just five goals in 27 Turkish league appearances last season