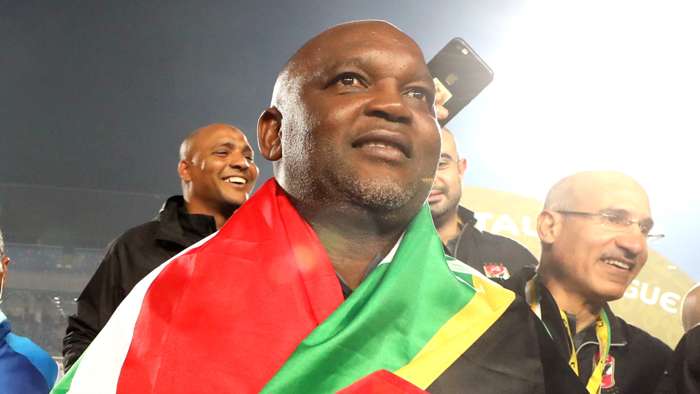 The outstanding achievement of Pitso Mosimane which has seen him collect five major trophies across two clubs in a year has cast a spotlight on the varying fortunes of coaches working in South Africa.

Mosimane completed a ‘Treble’ with Mamelodi Sundowns in the 2019-20 campaign, collecting the DStv Premiership title to go with the Telkom Knockout and Nedbank Cup.

He stunned many with a move to Egyptian giants al Ahly, who also completed a ‘Treble’ this season, though their domestic league title had already been sewn up before he arrived.

Still, he marched them to the CAF Champions League trophy, becoming only the third coach in history to win the competition with two different clubs following his success with Sundowns in 2016.

He then claimed the Egyptian Cup this past weekend, yet more silverware in what is a golden time in his career that has catapulted him to among the elite coaches working on the continent and easily South Africa’s most successful of all time.

Mosimane has now won 15 major trophies in his career as a coach, including a record five DStv Premiership titles, and there is plenty more opportunities available to him with another CAF Super Cup in the offing and the Fifa Club World Cup scheduled to take place next year.

There he could come up against the likes of Uefa Champions League holders Bayern Munich, a further chance to test his skills on a global stage.

“I'm humbled by what's being said of my impact but thank God, it's about time. I've always spoken about it that we can do something here, and we can show what South Africa is about [outside the country],” Mosimane told the South African Football Journalists Association.

"Thanks to PSL for giving me the opportunity, thanks to Mamelodi Sundowns and all the teams there that really sharpened the sword so we could test what we're doing outside.

"Thanks to Dr [Irvin] Khoza, I mean even the chairman gave me an award, so thanks to everyone. That's why I always said, PSL is one of the strongest in the continent, it really sharpened me."

Mosimane’s achievements stand head and shoulders above his former peers in the DStv Premiership, but he is also blazing a trail some might like to follow.

Here is a snap-shot of how some of the other leading coaches working in the country have fared in the recent past:

Hunt was given a bit of a ‘hospital pass’ when he moved to Kaizer Chiefs at the start of the 2020-21 season, unable to add to the squad due to a transfer ban imposed by Fifa.

He will hope to be given time to build his own team having finally been given the chance to coach at one of the country’s so-called ‘Big Three’.

"This is a totally unique experience, I think for me and I think for anyone. It's very unique what's happened, but I've got to face it and try to do the best we can with the players we've got," said Hunt.

"We've still got some good players here, so we need to get them back [from injury] and get them all playing again.”

Hunt led BidVest Wits to a respectable fourth place last season, though with more of a clinical touch in front of goal they may have wrestled the title from Sundowns.

Still, given the drama of the club’s sale and the obvious disappointment for all involved, Hunt included, it was a good achievement.

Often spoken about on the same level as Mosimane given his league success in the past, Hunt has fallen some way behind but is at a club big enough to change that.

German coach Zinnbauer is yet to win any silverware in his coaching career, but has the chance to change that on Saturday when he takes his side into the MTN8 final against Bloemfontein Celtic at the Moses Mabhida Stadium in Durban.

He will look at his first season in South African football as a success. Pirates were in seventh position when he took over, with just 17 points from 13 games, but he led them to third in the end.

But for a poor start to the Gauteng bio-bubble and they could have been champions too.

"It's a long season, for us we don't speak about the places [on the table] now, it's too early for us to be speaking about this. What's important for me is the next game and this is the focus now – that's the only point we have to work on," Zinnbauer said.

He has also had to overcome personal hardship with his son in a coma in Germany after a car accident.

Tembo led SuperSport to the MTN8 title last season for a first piece of silverware as a head coach but will feel they lacked consistency in the league.

The club have tried to lower their average this season by injecting younger players into the team and that does have an inevitable impact on results.

The team finished fifth last season but only second-placed Chiefs scored more than their 43 goals. A tighter defence might have seen them higher up the table, though their goal-difference of +17 was the third best in the league.

This season has been a so-so start with three wins and two losses in their five games.

“I’m happy with the progress, to be fair on the team, we’ve done well with what we have, considering what we are getting in the market,” Tembo said.

“We are no longer a team that can go out into the market and bring in the players that we used to bring in before, so we have to try and make do with what we have and still stay competitive and I think we are on the right direction.”

Dutch coach Olde Riekerink joined Cape Town City in November 2019 after the departure of Benni McCarthy following a disappointing start to the season for the side.

He came with a solid reputation of working in Holland and Turkey, where he won the 2016 Turkish Cup final with Galatasaray.

It took him some time to find his feet in the PSL, most specifically how to interact with the players as his gruff style initially ruffled feathers before, to his credit, he changed his methods to suit those around him.

His 27 games in charge have yielded 11 wins, seven draws and nine defeats, but he has generally been lauded for the football he has employed at the club and the teams record since the restart of the 2019-20 season in August has been vastly improved.

“I think it’s acceptable how have we have performed,” Olde Riekerink said. “I think if you aim to be even a challenger for the top five we are a little bit behind schedule but with the way we play I’m very satisfied. The way we create the chances can be better.

There is the perception that Stellenbosch FC are a ‘small club’, but there recent movements in the transfer market suggest they are anything but, and coach Steve Barker has often spoken of his desire to emulate the continental success of Mamelodi Sundowns.

That is not possible without financial backing and they have that, a growing rarity in the PSL as the Covid-19 pandemic drains the appetite of owners.

Barker came close to winning the 2009 Nedbank Cup with second-tier University of Pretoria, but their 1-0 loss to Swallows FC means he is still without manor silverware to his name, though he did win the GladAfrica Championship title with the winelands club in 2018-19.

Their first season in the top-flight was solid enough, they finished seven points clear of the relegation zone despite multiple challenges, including no home stadium, but the expectation now will be to build considerably on that.